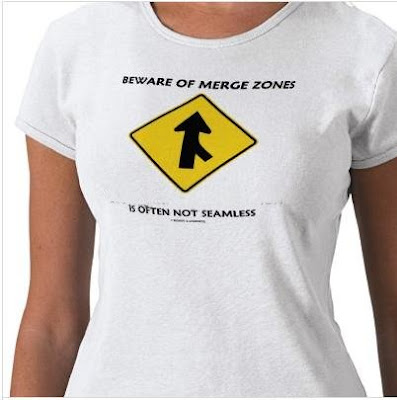 There are some dangerous situations that are not well understood by most motorcyclists. I think this is one of them. Yesterday, I was a passenger on Mary Ann's Burgman, and we were merging on to the freeway. An aggressive driver was following her down the ramp, and at the point where she actually merged onto the freeway, he pulled out to pass us and managed to get into the exact spot where we merged. So, two vehicles in the same spot at the same time. We didn't touch, but that is way too close for comfort.

Now why? She was travelling at a reasonable speed, she signalled properly, and did a shoulder check before moving over. A real scientific investigation would need to re-examine all those statements, of course just to make sure for example that the turn signal light had not burned out, or to find out exactly what the speed really was.

In my opinion, this could not normally happen because a car would not be able to accelerate fast enough to get into that spot in the time it takes to complete the merging process. However, a combination of everything going wrong at the same time might just do it. That would require all of the following.

1. To allow the scooter slow just slightly while doing the merge.
2. The car behind has a lot of power, and has left a gap, which is already closing with full acceleration.
3. Doing the shoulder check a fraction of a second too soon, when the car has not come close enough yet.
4. Not turning the neck quite far enough, or having the view partially blocked by the passenger (me)

Of course, if the other car drivers were any good, they obviously should plan for, and allow the driver in front to merge ahead of them. But because of the high density of traffic, this stupid situation happens frequently enough (in southern Ontario anyway) for the lead driver to plan for it and take precautions to prevent the following driver from trying to shut them out. What can be done?

It is no good to try and leave them behind with pure speed on the ramp, as they might then accelerate to follow you and this might make things worse. But here are things that can be done.

1. Try to merge into the freeway lane as soon as possibe, which is at the beginning of the dashed lines. Unfortunately, a few following drivers merge before the dashed line starts, crossing the solid lines.
OR if the merge lane is really, really long, you could wait for the tailgater or whatever to get by before merging. This is only possible, if they start the merge too early, AND if the ramp is long enough, and we have some ramps around here that are over a kilometer long.

2. Accelerate as you merge. I think this is always better than steady speed or even (heaven forbid!) slowing while merging. The only reason I slow when merging is to fall in close behind another vehicle. But even then I try to accelerate as I cross the dotted line, to try and match speeds. However this matching speeds trick needs practice. By the way, practice is always good, just do the practicing when it's not raining, or night, and the roads are not busy, and no construction or other distractions. Otherwise it's not called practice, it called dangerous driving.

3. Shoulder check twice when some driver is following you onto the freeway. The last shoulder check should be as you cross the dotted line. I have occasionally been saved by a second shoulder check. It's really shocking, when it happens, because the car is so close, and because of that surprise I may jerk the handlebars a bit, but I have always managed to get back into my lane before contact.

4. Sticking a left hand out to help indicate where you want to go is another way to get attention, when you have a potential danger behind, who may not feel they need to respect turn signals.

Anything else? I suggest a bumper sticker on the back "Honk if you like to see guns fired from a motorcycle", instead of "I brake for turtles" (guess which is Mary Ann's bumper sticker)
Copyright the Lost Motorcyclist