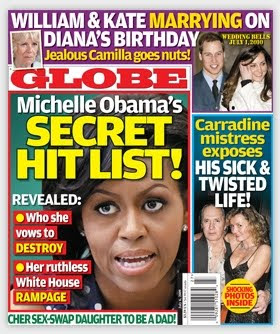 There has always been trash journalism. The difference is that today, there is more opportunity than ever before in human history, to spread false or misleading stories. This is done for a variety of reasons, and to make money is not the only one. Many people take delight in spreading fear, hysteria, or crackpot theories without any hope for compensation. The motivations can be many and varied. Sometimes just the desire to ruin someone else's life is enough motivation.

Just today, three stories I came across help illustrate that trash journalism is much more than just the Fox News Network. Perhaps I should refer to it as "gossip journalism", as "trash journalism" sounds so negative. And in some cases I am not totally negative about it. Here is the first example. Rolling Stone magazine published an article called "Runaway General" that got General Stanley McChrystal fired. In one sense, I would call this trash journalism because on a very basic level, it was trap set by a reporter, to gain the confidence of the staff. Later, he created a report that made them look disrespectful of their Commander in Chief and lots of other people. Whether they were disrespectful or not is not the question for me. They allowed the reporter to talk to them, and apparently approved the article, and were fired because of the tone of the article. In the final analysis, the story was the story. Like I said, not necessarily trash, not necessarily false or misleading, but not really great journalism either. Just banter that was put into print.

The second example is out of The National Enquirer. A 55 year old masseuse, employed (or contracted) by a hotel Al Gore stayed at four years ago, and reported Al had sexually harassed her. National Enquirer printed the story with a front page picture.

National Enquirer is one of those magazines you see at the grocery store checkout. The others are Star, Globe, OK, "Weekly World News" and many other titles. Quite honestly, I group these grocery store papers in one of two categories. Those that are true, but gossipy and unimportant, and the others that would be of colossal importance, if they were true. The National Inquirer was the first I know of to report on Charles and Diana breaking up. And of several similar personal and or sexual stories, like Canadian motorcycle racer Mike Duff wanting a sex change operation. A surprising number of these stories ended up being scoops for the National Enquirer, and later were proven to be based on fact.

The other stories would be of monumental importance if true, but have never panned out. Most of the other magazines specialize in that other type of story, such as "Obama appoints extra terrestrial alien to be Secretary of Space". Or "Pet Dog born with head of Elvis", showing the obviously photoshopped picture of Elvis Presley's face on a puppy. Yes, if it was true it would be of great scientific importance, but these stories never yet have proven true.

In reading about "The National Enquirer" in Wikipedia, I came across this interesting allegation I have never heard before:

"Founded in 1926 as The New York Evening Enquirer, Sunday afternoon newspaper distributed throughout the city. It was founded by anti-Semite William Griffin in 1926 and became a voice for isolationism and fascist propaganda in the 1930s and 1940s.[2]"

Obviously, the National Enquirer has changed hands since then, and is not in the business of Nazi propaganda any more (I don't think).

The third and last, for now, is from a website on the internet. I'm not sure how current that link will stay, due to the design of the website, but here is how the article starts off with this unfounded and probably false statement:

"EXTREME ALERT-MOVE YOUR FAMILIES NOW!: Inside sources have informed me that Full scale Gulf Coast evacuations are expected to begin in next couple of weeks--With Methane now surfacing and Bubbling in Florida waters the potential for a Methane Explosion of unimaginable devastation now comes into focus Further Law Enforcement Sources are being Advised of "ESCALATING VENT DETERIORATION" Two Definitions were provided to me--First "VENT" DEFINITION-"The opening in a volcano from which gas and molten rock erupt" and "ESCALATES"- DEFINITION GIVEN-"To expand step by step as from a limited or local conflict into a General NUCLEAR WAR"--to become unmanageable--You don't need a rocket science degree to read between the lines. Ten Years ago after the Papua New Guinea Earthquake in which "Burnt to a Crisp" bodies were pulled from the Fiery Seas-Stan Deyo and I did multiple Radio programs together over the years, warning of the Methane Hydrate Problems off our Coasts that could turn into "Seas Of Fire". "

Two links are provided in this section, I suppose to provide background scientific information.

It just happens that I have a sister in law living in Sarasota Florida, and so somehow one of Mary Ann's cousins came across this website and asked her if she thought it was the real thing, in which case a warning might be in order.

As far as I'm concerned, it's quite one thing to believe Al Gore sexually harassed a masseuse, and quite another to tell your sister in law to pack her bags and flee her home, based on a website story with no reputation of credibility.

By the way, if you do actually follow either of those links in the website, you will find that the first one is about a carbon dioxide explosion, not a methane explosion, and you should not have to be a rocket scientist to figure out those two are different. The second link, you can decide for yourself whether it is relevant.

Apparently it is true that there are localized high concentrations of methane gas dissolved in the waters of the Gulf of Mexico, presumably due to the oil spill. Another link was provided here: http://www.reuters.com/article/idUSTRE65L6IA20100622 In case you do not know, Reuters is more credible than SteveQuayle.com. Knowing how credible a source is comes with much experience, I guess.

What do we do about this spread of gossipy trash journalism? It seems that it is getting worse instead of getting better. I might as well admit that I don't have a clue yet, except to (1) search various reputable sources, including Snopes.com (2) stay in school when you have the chance and do your homework (3) Don't evacuate your house until you email another family member or friend for a second opinion. (4) try actually reading the whole thing, sometimes it's a joke or there is some context to consider.
Copyright the Lost Motorcyclist