The Protocols of Biker Trash Talk 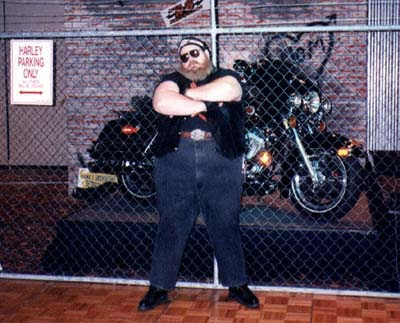 I came across an old blogger post from February, 2008. "A Loose Interpretation of "Brotherhood"" from the blog called "Twisted Roads" By Jack Riepe.

In it, Jack tells an amusing tale of bikers trash talking each other. I assumed it was written tongue in cheek, with a few "changes" to enhance the drama of the tale.

Unfortunately, I think there is a tendency for new riders to be intimidated in situations like these. And this blog entry, with it's aggressive language will do nothing to allay their fears. So it's up to me to try and set things straight, and at the same time put into words the unwritten code of biker talk. Let's start with this: You can be a lot more trashy in your talk with an old friend than you can with a complete stranger. Hopefully everyone knows that already.

I will admit that I enjoy talking to other bikers when we meet on the road, at places such as Tim Horton's for example. But I have also travelled around North America by motorcycle, and the friendliness I have found is the same everywhere I go (although I have never been to New Jersey, the place of the first alleged remark, but on the other hand I was given a gift by a New jersey bike rider I met in New York). In fact it's almost embarrassing at times. There are places that you can't even stop for a second to adjust your helmet without four other bikers stopping to ask if you need assistance. And it really does not matter what you ride, from a Harley Sportster to a Puch moped. Once I was pulled over at the end of a long day by a guy on a Harley in northern Michigan, to warn me that my wife was falling asleep on the back, and to tell me where there was a nearby motel. And he gave us a wood carving he had made himself of a fisherman, that still balances on our living room wall unit.

So the first rule of biker talk etiquette is don't be intimidated, they are all friendly. The only exception might be if you were to stop and try to talk to some bikers who have already drawn their guns on each other, you may get a frosty reception. But that never has happened to me. Also, admittedly I do not hang out in biker bars at night when everyone is drunk. So I guess I'm mainly talking about daytime stuff where people are out enjoying riding their motorcycles, and not when some of them are getting into mind altering drugs and booze.

The second rule, and this is my own rule, is "If you can't say anything nice, don't say anything at all". This is about another person's bike of course. So the nastiest thing I might ever say about a bike would be "My, that sure is a nice symmetrical looking oil puddle under your crankcase."

In reading the "Loose Interpretation" blog entry, I came across a number of trash talking comments that didn't sound real to me. Maybe Jack punched them up just a little for effect. For example, calling someone's bike a "little girl's bike" is always wrong. Calling it a girl's bike is OK however, as it is well known by now that girls can ride almost any bike ever made. One day as I was looking at a Boss Hoss, musing aloud to my friend how hard it would be to ride, a young lady (NOT a Little Girl) piped up with "It's easy, and I know because I have ridden one." A Boss Hoss is a bike with a Chevrolet V8 for an engine, and it does not look easy to ride.

A "girl's bike" in the right context can be funny, but calling a bike a "little girl's bike" is just never done, unless someone is wanting to pick a fight in a "Wild Ones" movie, or maybe a bar at 2 AM.

Also, any talk of kicking in the nuts, or head butting in the nuts, or Turkish prisons, is similarly not done in normal biker talk. And, to be fair, these were comments that Jack did not actually say, though he obviously was thinking of it after the fact.

Next, I am doubtful of the comment "Why do you jerks dress like that on such a hot day?” from some hard core biker types at an ice cream stand in West Virginia. The clue is being at an ice cream stand and not a saloon. Actually, there is just one word that gives it away: "Jerks". A motorcyclist at an ice cream stand does not call another a jerk unless he has just knocked off the top scoop of the ice cream. Then it might be justified, and everybody says sorry and moves on. Take out the word "jerk", and it is a reasonably friendly comment and an opener for a conversation.

In general, the new riders do not trash talk other people's bikes, because they are aware of how little they know about motorcycles, so they are more into asking questions. And in general the experienced riders have ridden everything (including Jap bikes and maybe mopeds) and they have met everyone, and have respect for all motorcyclists. And I might add, generally Harley riders are actually more friendly than most, maybe because they are aware they are making up for the bad image they got from a lot of low grade biker movies.

The answer should be "Actually it is German." And sometimes I have made that very comment, and it usually starts a conversation like "I didn't know BMW made motorcycles!"

The most embarrassing comments of all, are when I am pushing my bike home because it broke down. Then I am in a mood when no comment is taken the right way, even the usual offer of gas, or a ride to a gas station, is unwelcome. But that's just me when pushing a motorcycle home. Because I'm usually not in a real talkative mood at that time. But I do try to not respond with harsh words, because I know they mean well.