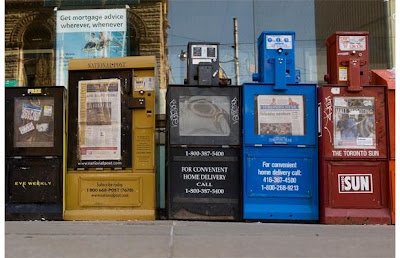 In the wake of the G20 summit held in Toronto, there are conflicting headlines in the newspapers, concerning the police actions. I am going to pick four papers from Toronto and contrast their stories, mainly looking at the titles rather than the content. I got the titles from looking at each paper's web page this morning and clicking on the story I saw about the summit controversy,


There is a theory in spreading propaganda that you can get your readers to think a certain way by your choice of title, so I chose only the title rather than get bogged down in the content of the article, which you can read if you want to, by clicking on the links. But don't be surprised if the content does not exactly convey the same message as the title, that's part of the technique.

If this theory is correct, each paper will pick a title to get the readers to think along the lines dictated by its overall editorial approach.

I think it is agreed that the Toronto Star is a liberal, if not left-leaning paper. So their title seems to match their left wing slant, and appears to sympathise with the left wing protesters.

I am pretty sure most people know the "National Post" is a right wing paper, and by definition, would be on the side of the riot police. I am making the assumption that conservatives and right wingers are in favour of "The Man", the police, who are working for the governments and/or the corporations.

The "Globe and Mail" is the most widely respected paper in Toronto, and considered more neutral than the previous two. And the message of the headline, I feel, is somewhat in between the left and right wing views. Their headline manages to simultaneously suggest that apologies were in order, and that none were needed. Maybe you also noticed, the only title that did not quote someone.

The "Toronto Sun" is a tabloid, and tries to appeal to the average working class guy, as you can tell by the scantily clad Sunshine Girls in every paper. Their intended audience is looking for a simple, easily understood opinion.

Incidentally, I am not trying to promote the "Globe and Mail", although I suppose it might look like that from this post. I subscribe to none of these papers, I do not even live in Toronto, and I do not work for the Globe and Mail company. If you feel my assumptions about the Globe and Mail (or any of the other papers) are misguided, your comments are welcome.
Copyright the Lost Motorcyclist