Lessons Learned from the Nazis 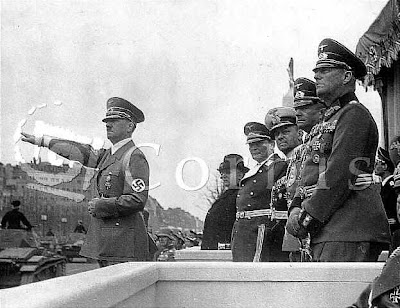 What did we learn from the Nazis? Let's do it like a Letterman top ten list, start with the least important. I have actually 11.

11 - We need an international institution where the nations of the world can come together and discuss their differences, and solutions to war. That's why the UN was set up, and almost every country in the world participates.

10- Dictatorships tend to declare war with a lot less justification than true liberal democracies. But even having a democracy is no guarantee against being a warlike country. In fact some democracies are actually fake, where people are killed if they vote for the opposition. Or ballots are not fairly counted.

9- Every country in the world claims to be acting only in self defense, including the Nazis. Hitler frequently declared he was a man of peace. So words of peace alone are not a reliable indicator of peaceful intentions.

8- Arms buildups are not wrong all by themselves, but the size and intensity may be an indication of future trouble.

7- Nobody is allowed to use the legal defence "I was only following orders" when they are torturing and killing civilians.

6- Torturing people is wrong, that's why we have the Geneva convention.

5- Group punishments, and reprisals against innocent civilians for sabotage and terrorism are wrong.

4- Invading a foreign sovereign state is wrong. No excuses are permitted such as "They were mistreating their people" or "they attacked us first". The only acceptable way to invade a foreign country today would be with the full support of the rest of the international community, such as the UN, for example.

2- Gassing civilians to death based on religion/race/politics is wrong. Also wrong to do it based on intelligence. And not just gassing alone, any form of mass killing that you might ever invent in the future would still be wrong.

And finally, number one, numero uno, in all caps because it deserves it: NOBODY IS THE MASTER RACE

These are the lessons we should have learned from the Nazis. But in the sixty or so years since WW2 ended, we did not seem to really understand these lessons. We still can justify our own Nazi-like actions. And we are still reluctant to find out the truth about what is really going on right under our noses.

No matter how bloodthirsty and warlike we are, we always manage to compare ourselves to the Jews under Hitler, and compare our enemies to the Nazis. So it seems we have not really learned that much.

The most ironic example of ignoring the lessons from the Nazis is the Jews themselves, who are now occupying a country they invaded 40 years ago, and are still moving Jewish settlers into this occupied land, putting up barriers and military checkpoints up for Muslims, disallowing Muslims the freedom of housing, travel, or commerce. And of course they still compare themselves to the poor downtrodden Jews under Hitler all in the name of "Israel has the right to defend herself". Or maybe they did learn some lessons, but all the wrong ones.
Copyright the Lost Motorcyclist