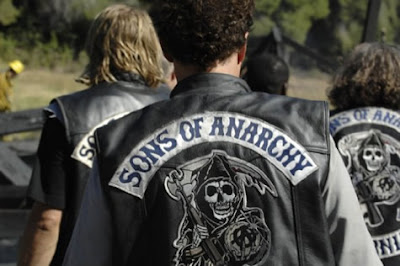 In our culture, we have criminal "Biker gangs", and somehow the blame for this is placed on the motorcycles themselves. What is overlooked is the influence that war and war veterans have had on creating this culture.

Last week, while riding around I noticed a biker go by with a large patch on the back of his jacket with the words "Sons of Anarchy". I wondered briefly if this was either a new motorcycle gang, or maybe the anarchists were getting into the hobby of motorcycling. But then this morning I came across another mention of "Sons of Anarchy" in the news, in a story where the SOA had apparently been snubbed by the Emmy Awards. Now my interest was piqued, so I started Googling and found out that "Sons of Anarchy" is a regular weekly show on the FX Cable Channel. I don't have this channel, so I didn't know anything about the show, even though it has been on for a couple of years at least.

I was disappointed to find out that is is a show about a classical "Hell's Angels" type biker gang. As if we need to perpetuate these criminal stereotypes even more than they have been in the past fifty years. Furthermore, it does appear to be a product placement opportunity for the Harley Davidson Motor Company. This type of PR does not make me want to buy a Harley Davidson, in fact the very opposite. But then I wasn't shopping for a Harley anyway, so my puny boycott isn't going to hurt them one bit.

Katy Segal has one of the starring roles. She previously had the role of "Peg Bundy" in "Married With Children". Peg was a big-haired, not too bright, lazy wife of the even crazier shoe salesman and ex-high school football star, Al Bundy. Now I guess Katy is starting to find roles that are breaking away from that stereotype, which is good for her. But not so good for motorcycling.

So this show joins a list of TV shows such as "The Sopranos" and "24" that I also dislike, because they portray violence as the norm, not the exception. They also promote violence as necessary. Too bad we can't ever go back to the "Lone Ranger" who only shot the gun out of bad guy's hands without killing or injuring him.

Speaking of Biker movies, this is the fortieth anniversary of "Easy Rider", a movie that you could argue was also about biker gangs and violence. But I did like Easy Rider, and I don't think it was the same as "Sons of Anarchy". Easy Rider's main characters might have made money selling or smuggling drugs, but this was done either before the movie, or in the first minute of the movie, and it was not portrayed as a violent crime. In the entire movie, I don't think they engaged in a single act of violence. Maybe a little crime, if you consider smoking a joint a crime. The only violence in the movie was actually committed against them not by them. I consider Easy Rider to be a "liberal" biker movie.

Now we apparently have people riding motorcycles with the names of fictitious TV motorcycle gangs on the backs of their jackets. I suppose next we can expect bikers to start getting tattoos of TV shows.