The Cambrian Explosion was not the Garden of Eden

Charles Darwin wrote that there was an event called the Cambrian (Cam-bri-an)** Explosion that he found difficult to explain in terms of evolution. And here we are a hundred and fifty years later, with websites and youtube videos from creationist groups stating that the Cambrian Explosion positively disproves Evolution.

Why did Darwin bring this on himself? Why not just pretend it doesn't exist, just not mention it. I guess that's where scientists have a flaw compared to religious people. Scholars and scientists need to look at both sides of an issue, because their reasoning is based on evidence. Other scientists would already know about the Cambrian Explosion, and so Darwin had to at least address the issue even if he didn't have all the answers at the time.

Unfortunately, creationists point to Charles Darwin's mention of the Cambrian Explosion, and call it his admission of defeat. Creationists do not think like scientists, and to them, any admission of weakness is a red flag. To a fundamentalist, strength lies in unwavering faith, and the ability to overcome evidence and logic.

The fundamentalist websites usually overstate the suddenness of the Cambrian Explosion, and also suggest that many present day animals appeared at this time, with no previous fossils. This amounts to a deception. Many Fundamentalist bible believers mistakenly think the Cambrian Explosion happened in one day, and in that day all current animals abruptly appeared. But to a scientist studying evolution, ten million years is sudden, or "abrupt". And can be referred to as an explosion. I've said before that scientists do get misunderstood by ordinary people. Ordinary people have their explosions in a matter of seconds, not millions of years.

The way I see it, the entire argument about the Cambrian Explosion by the creationists is like a rear guard action. For a comparison, consider a retreating army blowing up bridges. Sure it's nice for them, it gives them more time to retreat and maybe regroup and counter attack. But blowing up bridges is not winning, it is trying to slow down the enemy, and sometimes it is very effective.

Since Darwin's time, all new evidence has supported and extended the theory of evolution, and in fact other lesser "Explosions" were found such as the Avalon explosion.
ttp://www.astrobio.net/exclusive/2580/the-avalon-explosion 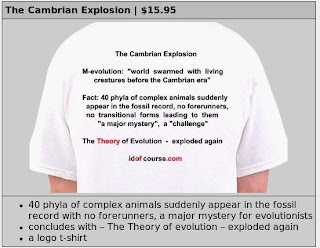 So the Cambrian Explosion cannot prove that Eve ate the apple and then Adam and Eve were both kicked out of the Garden of Eden 4000 years ago. But distorting it may help slow down the scientists by misinforming people, and obstructing public education. It gives more time for a campaign to convert as many people as possible to Fundamentalism. At the same time, Biblical people accuse the Darwinians of helping Hitler to Kill the Jews. That's how fundamentalists fight against the forces of Satan and his black magic.

** CAM-bri-an sounds funny to me, because I live near a city called Cambridge that is pronounced CAME-bridge. Good thing I'm not doing a youtube video.

T-shirt Picture: The anti-Cambrian Explosion argument fits on a T-shirt, but not on a bumper sticker.
http://www.idofcourse.com/tshirts.html
Copyright the Lost Motorcyclist