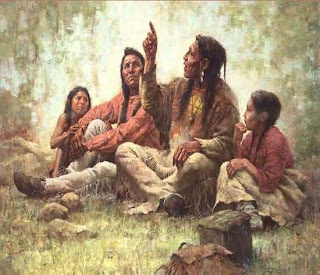 Most, if not all societies, have creation myths. Yes, we call them myths because they are made up. I know that Christian Fundamentalists would be upset at the suggestion that their creation story is also a myth, so for the sake of avoiding an argument, I will leave their story out of it for now.

Last night I went to the Historical Storytelling Series put on by the Friends of the Waterloo Region Museum. It is on every Tuesday night, and last night it was "Oral Traditions Along the Grand" by Aaron Bell, an Ojibway storyteller. Among other stories, he told two different First Nation stories of the creation, and not only that, tried to tell what purpose was served by these stories in popular culture. I had supposed that it was people wanting to know answers to questions like "Why are we here", "where do we come from". I forgot that there may be another more important purpose to creation myths.

Although creation myths are common to almost every primitive or advanced culture on Earth, it is not because of any need for a scientific explanation of creation. They are universal because they all basically teach respect for elders, and for ancient wisdom.

There are certain common elements that pop up in creation stories. Not every creation story is the same, but for example all the North American Indian (or First Nation) stories feature the character of the "trickster". This is the character who introduces an element trickery to creation. To the Haida, it was the crow. To the Chippewa it was Nanabush (who could take any form he wanted), to others it was Glooscap, the spellings and names vary a lot.

Immediately, I thought of the trickster character in the Judeo-Christian creation story, the talking snake, who tricks Eve into eating the apple, which gets humans kicked out of the Garden of Eden, and explains pretty much all the evil in the world.

I am not trying to make the point that there is any kind of moral equivalency between the Haida and the Fundamentalist Christians. The point I'm trying to make is that creation stories are not told to educate us about science. They are not there to challenge our knowledge of the world, or to be debated and dissected, or to be proven right or wrong. They are there as a means of teaching respect for elders, and for ancestors. They are a way to teach respect for the environment, respect for God, respect for ancient customs and knowledge.

It seems very natural to me that younger people would turn to their elders and ask where they came from. After all, the elders were there before the younger people were born. The story of their birth is itself essentially a story of creation that is as interesting as any other. From there it is not too far a stretch for the elders to recount the stories they were told from one generation further back. And then, (why not?) since the youngsters are in a listening mood, give them the ultimate story of the creation of the very first human. Just to complete the picture.

One other thing all the creation stories have in common (almost by definition), is that they tell how the first humans were created. The creation stories do not focus on where other things came from, in almost every story something is there already. In some cases, the beavers, crows, muskrats are already there when man is created. I guess in the Jewish story, God and Satan and the angels are there already. Not much time is taken explaining the origin of the rest of the universe, very little time in the story is taken explaining the creation of other animals. Naturally, a creation story tends to focus mostly on the creation of the humans.

Stories of creations are first and foremost a part of the human storytelling tradition. These stories lose much of their traditional function in society when they are copied into a book. That function is to bring elders and the new generation together in mutual respect.

Picture: The Storyteller by Howard Terpning, I got it from this blog:
http://robertmilliman.wordpress.com/2010/09/12/and-the-most-effective-teachers-are-storytellers/
Copyright the Lost Motorcyclist