Cold Saturday Ride With a Purpose 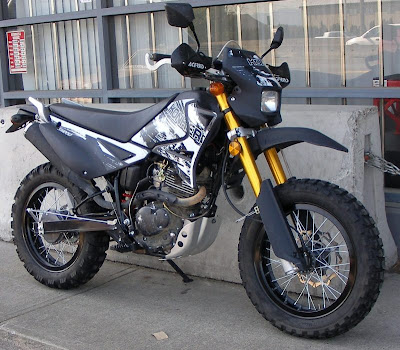 We just had a weather relapse of about 5 days. Yesterday I had to wear a toque and a parka to go for a walk. Today the sun came out and we had a high of 11c. And because it's Saturday, I had a chance to meet some friends at Tim Horton's for lunch. It's also the first day of the big Spring Motorcycle Show, but I was thinking why pay $15 to see the new Honda Shadow RS 750 when I could see it for free at a Honda dealer? And there is another motorcycle I want to see, it's the Konker KSM200. But I can see that at Sirius Motorsports in Kitchener. So I started out early and searched for the new location of Sirius at 44 Saltzman Street. You really have to know the number, because it's around the back of a building in the new industrial park.

Sirius was open when I got there, and I really did like the look of the Konker 200. It's basically an enduro bike, but comes with street wheels and tires. It costs $3000, and for $600 more you can get an extra front and rear wheel with knobbies, and a bigger diameter for the dirt. I'm told they come with a sprocket and brake rotor, so all you need to do is unbolt the wheels and switch them for street or dirt performance. That's the type of messing about I just love. Also, this bike comes with a kick start as well as the electric start. And upside down front forks. When I was sitting on it, I bounced the suspension, and it seems to have a lot of travel, and should be able to float over some big bumps.

On my way to Timmy's, I noticed my vision was blurred, wonder if it's my Flo-max drug side effect kicking in? Actually, no, because when I sat down in the coffee shop, I tried cleaning my glasses and found one lens had dropped out. Luckily it was still in the bottom of my "fanny pack".

After a leisurely two hour lunch at Tim's, I decided instead of going to the show, I would go to the Honda dealer in London. I have never been there before, but now that Hully Gully lost the Honda franchise, there is a dealer on Oxford Street near Wolf BMW, called Mid-City Honda. So I headed for London from Cambridge following some unfamiliar roads. That always happens when I start out from any place other than home. I have lived for 30 years in the same place, and I know all the road to anywhere from my house. But put me down 20 kilometers from home, and I don't know how to get anywhere. Sometimes I just drive home first to get my bearings.

When I got to London I decided to do a loop through Wortley Village, that has been in the news lately. It's a cute little part of the city, kind of like Belmont Village in Kitchener, but Wortley street is much narrower, and has more people on the sidewalks. Then I found my way (no GPS!) up to Oxford Street and all the way to Mid-City Honda. Damn! It closed at 2 PM. I peeked inside and they didn't have the 750 RS anyway. So then I went to Wolf BMW, which was also closed. London seems to be not at all like Kitchener. In Kitchener, staying open and making money takes precedence over shutting the shop to go for a ride.

Next I headed for Stratford to get something to eat. When I arrived in Stratford, I was pleasantly surprised to find that the Flomax was working, so I stopped at the Erie Drive-In, which I have never been to before, because they have no bathroom facilities. With Flomax, I don't need no stinkin bathroom. Erie Drive In is famous for their foot long hot dogs. The reason I love foot long hot dogs is because when I order them, I get a big yuk out of asking "How long are your foot longs?". Not funny you say? That's because you have not heard some of the answers. Anyway, today I decided that I was not in the right mood to be funny, and ordered a bacon cheeseburger with the works instead. It was really cold, even with my two sweaters, two jacket liners, and leather overalls over my jeans. The wind was howling so that I couldn't let go of my napkin. (Did I mention that you can't go inside at the Erie drive in?) Most people were sitting in their cars with the heaters on, but a couple of little girls arrived on bicycles wearing t-shirts and ordering ice cream. Actually most people were ordering ice cream. Did they need to cool off? That's Canada, eh?

Picture: The Konker KSM200. The graphics are kind of lame, but nothing a can of flat black spray paint can't cure.
Copyright the Lost Motorcyclist