The Transition from Liberal to Conservative Made Easy 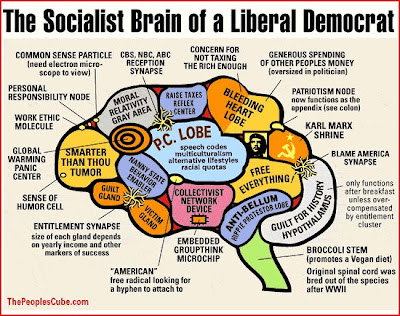 Another in my "made easy series", how a person transforms from a liberal to a conservative.

I think, for the most part, that people do start out their lives as liberals, and with time gradually turn to being conservative. If so, that is going to mean conservative politics will dominate for a while as the baby boomers become older and one by one, turn conservative.

My own conservative "awakening" has not happened yet, but already I can begin to see the pressure mounting that would normally push me over the edge, if I only had a brain.

Let's go back to the time when people just start to form their own political point of view, possibly after high school. That's about when you get to vote for the first time, but as a young person you don't really care that much. A young person at that age accepts the world as a place that has never changed and never will. That is because, during their own short experience, the world has not changed, and by logical extension, never will. So politics has no meaning, no matter who gets in power.

Now maybe I was particularly isolated as a child, living in the remote paper mill town of Baie Comeau. I did not have the opportunity to observe poverty, or wealth, as it was a strictly middle class town with both ends of the wealth spectrum missing. We had no visible minorities, our main concerns were around French vs. English or to a much lesser degree, Catholic vs. Protestant. I did not even get to see any old people. There was no senior citizens' home, and 50% of the population was under 16 years old. I first saw large numbers of old people when I moved to Sherbrooke, and took a city bus.

During a person's twenties, observations take place. You begin to notice such things as poverty, for example. During this period of time, there are a lot of major concerns that come up. My first one was a strong desire to see the world. That seemed more important than getting a car or a job.

Seeing the world as a young person is something that is likely to turn you liberal. You get to see the inequalities in life, and learn about social justice. Because you are young, you are not likely to blame third world poverty on "laziness", the way an older person might. Older people have put in thousands of days of hard work already in their lives, and often have a high opinion of themselves as a "hard worker" who earned everything they got, whether that view is justified or not. Young people are not yet thinking that way.

A younger person travelling in the world is likely to have a good opinion of foreigners, as young travellers often make friends in places that they go, and are treated well by locals. On the other hand, young people travelling abroad are often treated badly and hassled by the authorities, leading to a negative view of "THE MAN". This also undermines the typical conservative law and order bias.

Now moving ahead, to marriage, kids, and settling down. All of this usually takes place close to home. Having kids arouses protective instincts, and often this is the time that owning a house becomes an issue. At this stage, things begin to change rapidly toward conservatism. No longer do you have nothing to lose, like most liberals. You are becoming a land owner, and so you have much to lose. Now you can worry about theft, about the neighbourhood becoming a slum. That worry is the beginning of the conservative mindset. Suddenly you are concerned for the first time about how nice the lawns are, about how many and what type of weeds are springing up, not only on your own lawn, but your neighbour's lawn too. You don't fear police protection any more, you want more of it. And you are now not too far away from fearing that visible minorities might move in to your neighbourhood. This is the time that you might finally become one of those bigots that you mocked as a young person. I'm not saying it is sure to happen, but you are exposed to the pressures, and you may have neighbours around you to heighten your fears. Not only is this happening to you, but to most of your friends of the same age.

Let's go forward another decade or so. Your kids are going to school, you have a "good" job. You are worried now about how your kids are going to make out in life. They do not seem to have the same priorities as you do, about work, and money. They just want to goof off and have fun. They don't listen to your music, or dress the way you want them to dress. They don't hang out with kids that you want them to hang out with. They don't care about money, which is actually yours anyway. Now for the first time, you become aware that there is a generational gap, and now there is a generation younger than yours, and they have disturbing ideas. One of those disturbing ideas is that welfare is a viable career path. Now you begin to question for the first time the need for welfare, unemployment insurance, and any government benefit at all (except the Canada Pension Plan, that you might need in the not too distant future)

So, you start reading the National Post. You find the writings of Mark Steyn in MacLeans' magazine, and they are a revelation to you. When Mark says "it's the end of our white, Anglo-Saxon, Protestant way of life" you finally understand him, and a bond is formed. Now you are nearing the end of your transition from liberal to conservative. But there is still more.

Now that you trust Fox News, The National Post, Mark Steyn, Ann Coulter, and Pat Robertson as the true source of all knowledge, you begin to distrust science itself. After all, your own death is approaching now, and this is not the time to be mocking Christianity. You begin to turn to God and the supernatural. And since the end is approaching, you have no time for Al Gore and his scaremongering about the "future" global warming that you will never live to see anyway. You want, and need, to keep burning those fossil fuels. Drill anywhere you can for the last bit of oil if you have to, to keep gas under a buck a litre, even if it means more oil spills (unless it is on your own cottage waterfront of course). And for heaven's sake, we don't want to see those horrible three bladed wind turbines rearing their oh-so-ugly heads somewhere on the horizon, causing cancer and doing nothing but wasting taxpayers' money.

OK now I have laid out the entire transition from naive innocent young liberal to wise, rich, old conservative. According to the demographics of the baby boom, we are going to have a lot more old people than young people for about 40 more years. I think it's going to get very conservative out there.

Picture: How conservatives imagine a liberal brain would look, if they actually had one. This image is from Conservapedia, the conservative answer to all the lies and distortions of truth in Wikipedia.
Copyright the Lost Motorcyclist