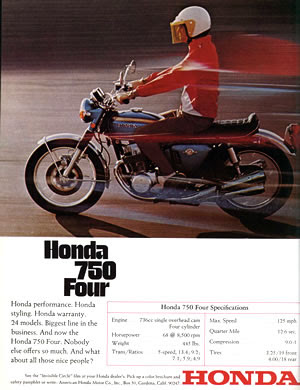 I would give that description to Honda's introduction of the first CB750 four cylinder bike, in 1969. I never owned one of those things, but just the very fact that they existed changed my view of motorcycling.

At that time, there were limited options for a beginning motorcyclist to move up. You could start out on an inexpensive, but clean and reliable Japanese bike under 350cc. But to go bigger you needed to move up to a 500 or 650cc British bike, or a 900cc Harley Davidson. Buying those bikes meant you needed to join a motorcycle gang, because if you wanted to go somewhere, you needed gang members to ride with in case parts fell off, or fell apart while riding. There was one other big bike option, the 500cc BMW touring bike, but that cost four times as much as your Japanese bike, and was not a lot faster or more reliable than the smaller Hondas.

Your choices came down to 1. Ride a small bike 2. Join a motorcycle gang 3. Spend wads of cash on a BMW.

The Honda CB750 blew the motorcycle market wide open. Suddenly, if you wanted to, you could ride a large, 120 mph motorcycle, that was so reliable you didn't need to join the Hell's Angels, and it cost a fraction of the other big bikes. I resisted buying the CB750 because I had a new Yamaha 250, but I knew that when I did become bored, I could move up to the four cylinder Honda.

The CB750 was more than just a big, affordable, reliable, bike that happened to be faster than anything else. It also introduced new technology to a previously sluggish motorcycle industry. Most obviously, the CB750 introduced the disk brake. But the boldness of Honda's design forced all the other manufacturers to aim higher or get out of the business. So for the next ten years at least, we had wave after wave of innovations, making motorcycling fun for the newcomers who enjoyed the technical advances, but not so much fun for traditionalists who wanted things to stay the same as they always were.

As it turned out, by the time I was ready to trade in my 250 Yamaha, the CB750 design was over ten years old, and there were many other choices on the market. I chose a 1982 Honda with even more technological advances than the 1969 CB750. It had a disk brake, of course, but also liquid cooling, shaft drive, and air suspension. I may have skipped the revolutionary CB750, but I benefited from the tidal wave of motorcycling technology that was unleashed a decade earlier.

The "new era" of rapid technological progress and big sales lost momentum during the eighties. Since the early nineties, motorcycling has hit a period of doldrums. Instead of breakthrough technology, we simply got faster and bigger bikes. There was also a striking reaction against new technology, led by Harley Davidson. They catered almost exclusively to the traditional bike market that existed years ago for gang members.

By the end of the eighties, Harley Davidson had again carved out the market niche, abandoned back in the eighties, for big tough old-fashioned bikes for big bad bikers. In the mean time, the biker gangs grew more mature, and many new motorcyclists were attracted by the tough gang image, as much as by the motorcycling itself. The average age of bikers went up, and so did their discretionary income. While the gangs were maturing with less boozing and fighting, the Harley Davidsons were also becoming more reliable, with internal improvements in their technology, updated manufacturing techniques and better materials.

Harley Davidson was so successful with it's marketing strategy that they now have over half the big bike market in the USA. Japanese companies were forced to follow suit and make their own bikes look like they would be at home in a Hell's Angels weekend ride. 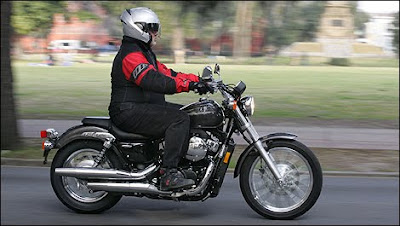 This year, Honda has introduced a new 750, the Shadow 750 RS, in some ways exactly like the first, with a single front disk and rear drum brake, chain drive, and laced spoke wheels. It is upgraded for the twenty first century with digital fuel injection and liquid cooling. It only has two cylinders, not four, and is barely able to reach 100 mph, but costs  six times as much as the original CB750.  Its boldest breakthrough? It is priced higher than the equivalent new Harley Davidson, the Sportster.  Now it seems you will be moving up when you trade in a Harley on a Honda.

Picture: A 1969 CB750 ad, and I found a picture of a 2010 Shadow RS on the internet, also showing the difference in demographic.
Copyright the Lost Motorcyclist