More Riding in the Rain 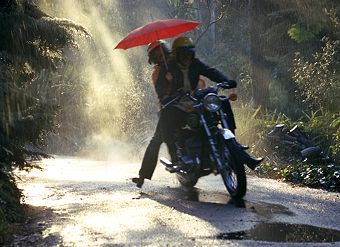 The first time you get caught in the rain riding a motorcycle without face protection, you realize that normal rain does not fall at 100 kilometers per hour. How fast does it fall? Drizzle falls at 8 kph, and big raindrops fall at 16 kph. So here are the differences, summarized, between a walk in the rain and a motorcycle ride in the rain. The rain hits you at ten times the speed. Ten times as much water hits you per second, I won't go into a mathematical proof here, but think about it. Finally, the rain is hitting you horizontally, not vertically.

Raincoats that are made for walking, are not really adequate for riding. To test a raincoat for riding, even a garden hose is probably putting out water at less than 25 kph. This commercial grade high pressure washer puts out water at 786 kph. That may be a lot more than you need to test rain gear on an average motorcycle.

Some of these numbers may explain why many motorcyclists refuse to go out in the rain. Unfortunately, that will prevent you from going on long rides, unless you have a trailer to pull the bike with. On a long ride, rain is almost impossible to avoid, although I have been getting much better at avoiding rain lately.

There is almost no situation where it is pleasant getting caught in the rain on a motorcycle. Even if it is over 100F outside (or over 40c), and you think you might welcome a rain shower, you won't like it. First the air gets cold, then you get hit with a wall of water at 100 kph, then you can't see where you are going as your face shield fogs up. Then you stop and a truck drives by and tosses up another wall of water over you. If you keep going, even though blind, you may find the roads a bit greasy, as the sudden shower lifts the oil off the road and smears it around.

Rather than a sudden thunderstorm, I may prefer an all day rain, at least it's a bit safer, and the road is kept clean.

I almost always ride with a full face helmet with face shield now. The next defence against rain has to be a waterproof jacket. Many textile motorcycle jackets today are advertised as water-resistant and breathable, made of fabrics such as Gore-Tex.

In my experience, these claims are somewhat exaggerated. What you will often find is that there are warnings about their use, such as method of cleaning etc. They may be good when new, but seem to lose their effectiveness after a while. If they are strongly supported by the manufacturer, they may replace the jacket, and give you information about what went wrong with it, whether it was a defective batch of fabric, or whether you accidentally punctured it, or some seams came apart, or it was improperly cleaned. Actually there are lots of other reasons why they might fail. On the other hand, a good old non-breathable plastic raincoat over your jacket will mostly work, but water will condense on the inside and get you a bit wet anyway under certain circumstances.

Even when you are fairly well dressed for the rain, an annoying problem is water collecting in your crotch and eventually seeping through. This is because the rain hitting you from the front is running down the outside of the front of your jacket (and sometimes the inside), and will pool up in the area between your legs, seat and crotch. Eventually it will penetrate, feeling a bit like somebody poured ice water down your underwear. You will notice.

Depending on the air currents, streams of water form to get you wet under waterproof material. You can get your hands wet if water runs down the sleeves of your coat, and your feet can get wet from water dripping down inside your pants, even if you are wearing waterproof boots.

There are a few other defences against rain. A windshield is usually good. The first really impressive windshield I experienced was on my BMW K1100LT. It was raised and lowered electrically. The first year they came out, you were warned to not try to adjust it while riding. That is pure BS. I was riding on a freeway in Florida, with a t-shirt, in very hot weather. I got hit with an extremely small and sudden rain shower. I raised the windshield while riding, and rode through the storm in about 5 minutes. The only part of me that got noticeably wet was the outer edges of my sleeves. BMW had obviously tested this windshield for rain during the design phase, and they included the only rain gutters I had ever seen on a motorcycle. When the water ran up the fairing, at the top lip there was a gutter to collect the water, that led to twin tubes that carried the water down to the street and drained it out down there. This feature was not advertised or mentioned at any time in BMW magazine tests, but it was there if you looked for it and could figure out what it was for. If the water is not drained away, it is all driven the the top or sides of the windshield, then around the edge, where it forms large drops which fly off randomly and may hit you anyway.

When you are riding, you actually encounter two separate situations, both are kind of bad. One is rain falling, even though the road might be dry. The other one is no rain falling presently, but the road is soaked from a recent downpour.

Sometimes the road is actually flooded. It is quite dangerous to venture across a flooded road, as you don't know what might be underneath. I encountered a flooded section in Baja Mexico once, that was about 200 metres of road under water. It was probably no more than 35 cm deep. I was warned about it by another motorcyclist who attempted to cross it after observing cars for about 10 minutes. Unfortunately, he didn't notice a truck coming the other way that buried him under a wall of spray plus the tsunami front wave. When I reached the same spot the next day (coming the other way), I observed it for about 10 minutes when a gang of teenage Mexican boys in a car approached me and waved me to follow. Maybe I'm too trusting, but they led me around the flooded section on some back roads, then waved me off when we rejoined the highway.

This is my earlier posting about rain:

Picture: Copied off the internet. I simply cannot endorse the use of an umbrella on a motorcycle.
Copyright the Lost Motorcyclist