The Invisible Hand that Cleaned Up the Environment 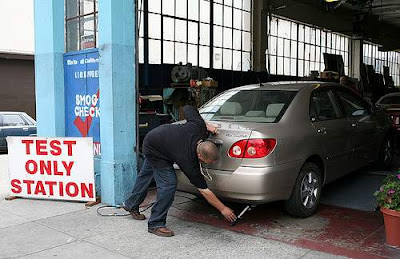 I had not been made aware of the body of work by Pierre Desrochers, until I was sent this "Earth Day" article by a friend. According to the article, Pierre Desrochers is professor of geography at the University of Toronto and associate researcher at the Montreal Economic Institute.

I looked it up, just to be sure, and his own web page says he is "associate" professor of geography at the University of Toronto (in Mississauga), but on sabbatical leave this year. I will not get into a discussion of the difference between associate professor and professor, but I had a friend who went through this process, and it is quite a big difference. You can find Pierre's article here in the National Post.

This article has many "hot button" statements, so I am not surprised, from the tone of it, that Pierre is regularly attacked by scientists and "greenies". Not physically, or course, I mean like what I am doing here, which is to try to point out what is wrong with his statement. I'm just trying to do my bit in the cause of truth and fairness.

The statement I picked out for my own response is this one by Pierre Desrochers:

"It was not heavy regulation or green activism that was primarily responsible for improved environmental quality over the last few decades but rather a process inherent in the market economy, leading to ever more efficient innovations and an ever more economical use of resources. When will we see an Earth Day where it is finally recognized that the market’s “invisible hand” also has a green thumb?"

With that type of statement, it is not surprising to find that Pierre is getting a lot of his work published in the conservative Canadian newspaper "The National Post", or that he is working for the Montreal Economics Institute, which has been getting a reputation as a pro-free market think tank.

This statement directly contradicts self evident truth. So apparently it was not the environmentalists who pushed for a clean environment, it was "the invisible hand of the free market"?  This is, in my opinion, a bald faced lie. An attempt to not only revise, but actually "erase" the public perception of what went on in the last 40 or so years.

There were countless initiatives by grass roots activists, some of which led to big changes, for example Greenpeace fighting against nuclear testing, including the death of a Greenpeace activist and the bombing, and sinking of their ship "Rainbow Warrior" by the French Special Forces. But let me focus on something different, in one area only, one that I had personal involvement with, although not as an activist, but as a regular Joe car driver. Probably similar to everybody else who might read this blog. I am referring to the 40 year struggle to clean up automobile tailpipe emissions.

In the struggle to clean up tailpipe emissions, I don't need to look up anything in Wikipedia, because I practically lived it, as did anyone who ever lifted the hood of a car in anger since 1969. The result of the struggle is that today, car tailpipes are ten times cleaner than 40 years ago. I don't need an emissions test on my Matrix to tell me that. (although I do have to get an emissions test to renew my stickers). I can just wipe my finger inside the tailpipe and it comes out practically clean after over 100,000 km. of driving. On the other hand, I only need to ride my 1970 Honda CD175 around the city once to come home "smelling of motorcycle" as Mary Ann puts it.

The clean tailpipe movement started in California, as an answer to the smog which was choking the city and suburbs. It was not started by "The invisible hand of the Free market", but by grass roots activists and government legislation in California. It was fought every step of the way by the automobile manufacturers, and many regular car drivers like me, who objected to all these controls being placed on our cars and tried to defeat them. Did we ever blame the car companies for inventing these "clean tailpipe" technologies, as we regularly ripped them out of the cars? No, we blamed the extremists in the environmental movement. Everybody knew the car companies were against the controls. To be fair, some car companies were hard at work researching the problem to produce cleaner cars, but those were the Japanese companies, especially Honda and Toyota. GM, Ford and Chrysler, on the other hand tried every trick in the book to get around the controls, and one of the best was to get their cars classified as "trucks" to take advantage of a loophole in the laws. We all know where that went, as today more than half the "cars" stuck in traffic jams are SUVs and pickup trucks. Partly resulting from their over-emphasis on trucks and SUV's rather than research and development, both GM and Chrysler declared bankruptcy last year, while Toyota became the world's biggest automaker. Now that result might have had something to do with the "invisible hand of the free market", if it ever existed.

For at least 40 years, friends, relatives, car magazine articles, were all telling me that those crazy environazis were "ramming pollution controls down our throats". Frankly, I believed it myself. So now, with clean exhaust pipes pretty much a reality, the corporate spin machine is rewriting history. The new "reality" is that it wasn't the environazis after all who forced us to clean up the tailpipes. Now we are to forget everything we knew, and blindly believe that it was the invisible hand of the free market that brought us clean cars. This kind of blatant propaganda could only work if the public at large had an exceedingly bad memory, or were actually sheep. I don't think it will work, because so many of us actually were poking around under the hoods of cars. But just to make sure, I will ask the car mechanic a question, the next time I go for my "Clean Air" emissions test. I'll ask "Who is responsible for us having to get our tailpipes checked every 2 years?". Unless he or she is a regular reader of the National Post, and just bought their first car this year, I'm pretty sure I know what the answer will be.
Copyright the Lost Motorcyclist