Spoiler for Bridge to Terabithia 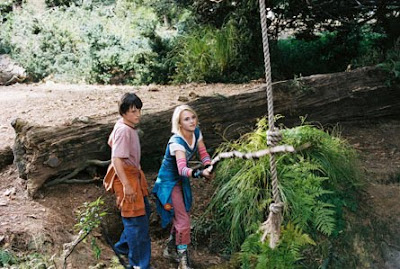 This is one movie where you actually would benefit from a spoiler. I don't want to ruin anything for anyone who wants to watch the movie. However, because the movie is so different from your typical movie, two problems arise. First, without a "spoiler", you may not even want to watch a movie about two young kids going to school, and after school, creating an imaginary world in a forest. Secondly, if you really do want to watch that kind of movie, you are going to be disappointed to find out it is something else. So that's why you need a spoiler alert in this case.

So, now to "spoil" the movie: this is a movie about dealing with death. I like to watch movies that deal with death, because I have experienced it myself, so it's actually interesting for me to see it in a movie. But we don't often get good movies about death in our happy ending culture, and so many movies about death are based on  spirits, the afterlife etc. For example, the Demi Moore Patrick Swayze movie "Ghost" from 1990.

But Bridge to Terabithia is a movie that deals with death in a real way that actually manages to come to grips with a senseless, random death. It didn't win any Oscars, and the book often comes up in discussions of which books should be banned from the classroom. Actually, the movie is based on a 1977 book, which Mary Ann has often used in her grade 5 and 6 curriculum. She didn't have any problems with parents trying to ban the book, so I guess this happens more often in the Bible belt, not Canada. There was concern that the young girl questioned the need for God to "damn people to hell" for not believing the bible. Also, given that death is involved, there is no portrayal of the afterlife, such as a ghost or an angel, to comfort people.

The movie gets some of its realism by going through the stages of grief as explained by Elisabeth Kübler-Ross in her 1969 book, "On Death and Dying".

So the book avoids the fairy tale stories of heaven and hell, ghosts and angels and grim reapers. But it still has magic, that comes from the imaginations of the children.

The only reason I missed it when it came out is because of this spoiler alert problem. Which actually is not much a real problem at all, because a spoiler will not spoil this movie. I watched it a few times, and I think it is better when you know what's coming, unlike most movies.
Copyright the Lost Motorcyclist