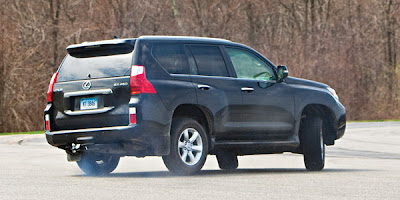 Here is a typical report in the press.

"The company, based in Toyota City, Japan, last week halted production and sales of the SUV after Consumer Reports issued a “don’t buy” recommendation, saying the GX 460 may be prone to rolling over in emergency driving conditions. The magazine, published by the non-profit Consumers Union in Yonkers, New York, issued its rating on April 13."

Here is a more complete story.

The fault I see with most reporting about the Lexus is this. There seems to be some kind of underlying assumption that "Stability Control Software" will stop a vehicle from rolling over, which is not true. It is designed to stop a vehicle from losing control going through a turn, by applying brakes on one side of the vehicle to straighten it out in case it begins to slide sideways.

But in no way does the software improve the resistance to rollover, which is a function of height of the centre of gravity and width of the wheel track. And in no way does it improve traction, which depends on the road surface and tire design.

Where stability control is useful is in preventing the car from beginning to slide sideways, which is more complicated than you might think.

"When ESC detects loss of steering control, ESC automatically applies the brakes to help "steer" the vehicle where the driver intends to go. Braking is automatically applied to individual wheels, such as the outer front wheel to counter oversteer, or the inner rear wheel to counter understeer. Some ESC systems also reduce engine power until control is regained. Electronic stability control does not improve a vehicle's cornering performance; rather it helps to minimize a loss of control."

So the car, when skidding is detected, will attempt to straighten it out and send it "where you intended it to go", and if you think about it for a second, how does the software know where you intended to go when skidding around a curve? ESC works reasoably well if you are rounding a curve and hit a smallish patch of ice, then end up back on pavement. In that case, the software will do a better job than the human in deciding where you wanted to go, as the loss of control is very sudden, so is the regaining of traction, and the ESC will simply try to get you back on course once traction is re-established. The recovery is very fast, and it is based on where were you going before the skid, and once the skid is recovered, the steering is back in the driver's hands.

Some stability control systems are more "controlling" than others. Some drivers prefer a less intrusive control, these would be the better drivers, with more experience and sharp reflexes. Some drivers would prefer to give more control to the computer, those would be typified by my mother.

When a driver is deliberately provoking a skid, I'm guessing that the ESC would have a harder time telling where the driver intends to go. In some cases, admittedly rare, it may send you straight into a dangerous situation.

Consumer Reports managed provoked a sideways skid in one of their tests. The obvious solution would be to ratchet up the control a bit in the software. I personally would like to see this under driver control rather than pre-set at the factory or the dealers' anyway. Put a knob on the dashboard and let me dial it in myself from 0 (no ESC) to 10 (Max ESC).

The connection between stability control and rollovers is simply this: If you manage to provoke a sideways skid, and the wheels hit a curb while sliding sideways, the car will possibly roll over. This will not be as likely to happen if you hit a curb head on. But the ESC does not actually improve the car's rollover resistance or the traction of the tires, it simply tries to keep the front of the car ahead of the back of the car while skidding. That may keep the car from rolling over, but may not prevent it from going somewhere that you didn't want to go.
Copyright the Lost Motorcyclist