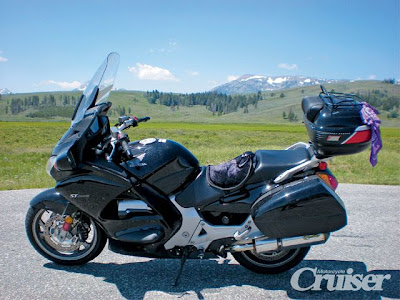 I just read an excellent opinion piece by someone who bought a Honda and wished he bought a Harley.

I myself have written one on why I have a Kawasaki, not a Harley.

I have seen friends struggling with the choice of buying a motorcycle, whether to get a Harley or something else. I sympathise with them, because I know it's kind of bad if you make the wrong choice, and it sometimes takes a big mistake before you know what you really want. Also, buying a Harley is based on some irrational feelings that are not easily measured.

John Kovach, in the first article, had owned several Harleys, and traded his current one in on a Honda ST1300. The decision made him feel bad, and after one long trip, sold the bike and went back to Harleys.

I noticed several things about his purchase that might have been warning flags. First, maybe most important, is that he made the decision impulsively, without even telling his wife, and when she saw the Honda, she was shocked and refused to ever ride with him on it. Can we call that mistake number one? And it has nothing to do with the relative merits of Honda vs. Harley (I don't think)

Second, John overestimated his power requirements on choosing the ST1300. It is vastly more capable than the Harley, and John had no need for this extra capability. He needed the Honda for a long tour with a friend, but the friend was still riding a Harley. That means John will not be able to appreciate the Honda's capabilities, as he waits for his friend's Harley. Forget the Honda's extra power, speed, passing capability, fuel range, ability to go 1000 miles a day, and even the ability to go out in colder or wetter weather if necessary. That is because you are travelling with a Harley, and you will have to wait for it. Even when he was not on that long tour with his friend, he ran into trouble on the Honda, collecting a batch of speeding tickets. Apparently, he was not accustomed to avoiding radar traps, I think the reason is obvious. Ticket-free speeding is something that comes with experience.

John has a lot of other reasons why he likes the Harley, such as tradition, and bonding with the bike, and even vibration. And they may all be valid, but let's face it, there were problems with the Honda ST1300 decision that could have been avoided in hindsight. Also, sometimes you just need to make a "mistake" in order to gain experience. I know people who have done that too, like me for instance.
Copyright the Lost Motorcyclist