A Tale of Two CDs 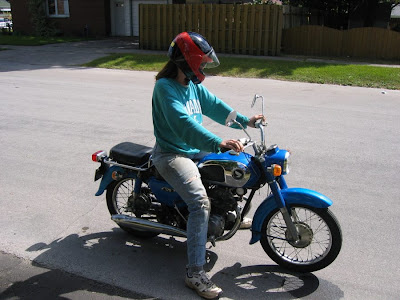 The Honda CD175 came out of the garage for its first ride of the year yesterday. I actually bought two Honda CD175s in 2001. The first one was red, with only about 2000 miles on it. It had been shipped to Canada by a Canadian teacher who rode the bike in Kenya. And I assume he (or she) could not bear to part with it. It was different for me. After I spent three years teaching in Sierra Leone and riding my blue Honda CD175, I regretfully sold the bike before I returned to Canada. When I saw a red CD175 from Kenya on ebay, in 2001, I had to have it, and I might have even paid a little too much in the excitement of the auction bidding.

I began restoring the red Honda, because even though it had very few miles, time had created some problems. Before the year was out, I had located another CD175 for parts. This one was blue and from the USA and severely abused. But I ended up restoring that one also, so nine years later I still have a red and a blue CD175 in the garage.

A few years back, I thought that Mary Ann might be able to learn to ride on the CD175. She tried riding it in a parking lot, and was doing OK, but she decided ultimately that the Suzuki Burgman 400 was more her style. The Burgman has exactly the same controls as a bicycle, no awkward foot pedals, lots of wind protection and storage, is faster on the highway, with better brakes, and best of all, she can tell other people she has a "scooter" not a "motorcycle" as if that is somehow more responsible.

Both my CD175s run equally well, although as you can imagine, they are not the same especially after all these years. Each one has taken on a different personality. The blue one needed a lot of work to restore, including an engine teardown. Red, the bike from Africa, only needed some TLC. The one thing they have in common is the quality of running forever. Sure they have the occasional glitch, if you call breaking a cam chain a glitch.

Right now I have the blue bike insured, and yesterday I drove it about 15 miles around city streets. I had to hit 70 mph on University Ave, (according to the speedo) just to keep up with traffic flow for a short stretch. I often had it at full throttle climbing hills. The fun of a small bike should be obvious, but I will explain again. On a really small lightweight bike, just going to Waterloo is an adventure like going across Mongolia. Keeping up with traffic down University make you feel like you are in a Grand Prix race. You cannot get those feelings of speed and adventure on a big powerful bike without actually going to Mongolia or entering the GP. And I think if you had a pocket bike, you would not even need to get out of your driveway.

Picture: Mary Ann is going to kill me for putting up a picture of her in her gardening clothes on the blue CD175, but she deserved it after that comment.
Copyright the Lost Motorcyclist