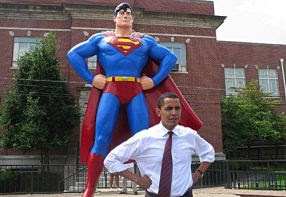 Time for another review of Obama's accomplishments. My previous blog Aug 29, 2009, was comparing Bush and Obama to Hitler to see who wins. But this time I'm not joking, and there is more history to look at.

Obama's reign, according to the pro-Obama and con-Obama sides shape up in these web pages.

- Accomplishments in tyranny and socialism

- Accomplishments in undoing the damage of the Bush years (facebook page)

When it comes to accomplishments, it is not the longest list that wins. Some items are obviously more important than the others. Some "accomplishments" are things that any President might have done. So I would like to just go over the major issues.

The Bush administration had been dedicated deregulators, and proud of it. But even they conceded that intervention was needed when the economy crashed at the end of their eight years. Their kind of intervention was to simply give the taxpayer's money, no strings attached, to the banks and let them bail themselves out. The banks eventually took obscene bonuses from the bailout, and are still fighting tooth and nail for more.

Obama's first accomplishment was to get the crashing economy turned around by passing the stimulus bill and by insisting on some changes, such as a new CEO at General Motors, and the restructuring of General Motors and Chrysler. Now, the stock market has recovered, job losses seem to have stopped, the economy looks set for some modest growth. It could have been much worse without Obama's intervention. I call it an accomplishment.

Now Obama seems set to tackle the financial industry, to re-impose regulations to keep them from crashing the economy again. The fight has only just begun, but it seems like he is willing to go head-to-head, and a small number of Republicans may be willing to side with him.

Obama has not withdrawn US troops from the middle East, and in fact decided to increase numbers in Afghanistan, while drawing them down in Iraq. This cannot be considered an accomplishment, unless of course they capture Bin Laden or emerge victorious from their fight with the Taliban. But victory in Afghanistan is not the only measure of success in foreign affairs. And if the fight in Afghanistan helps to ensure world security, that itself could be a measure of success.

Obama's priority is actually securing loose nuclear weapons and material. To that end, he needs to get the cooperation of Russia and China in preventing Iran from achieving nuclear capability. And he needs Pakistan to remain secure from takover by the Taliban. So everything he does, including the fight in Afghanistan, should be judged in whether it is helping on the nuclear weapons issue world-wide.

Lately, Russia and China have both come on board with the USA in trying to stop Iran from getting nuclear weapons. And Pakistan is waging a fight against the Taliban inside their own borders. All three countries believe they benefit from the USA taking on the terrorists inside Afghanistan.

What really helped most in getting the Russians on board was scrapping the anti ballistic missile defence that Bush tried to set up in Eastern Europe. In my opinion Obama made a smart move, but to many Republicans this was a surrender.

Obama's accomplishments in creating world peace and security are always going to be viewed negatively by the Republicans, because their only definition of success is US domination over the world. Obama has never ascribed to their theory of world domination, and so he is taking the cooperative road to world peace.

Another political problem at home is that many peace activists are upset with him over troop levels in Afghanistan. My own feeling is that keeping the troops in Afghanistan has helped in the larger goal of nuclear containment. His decision was a wise one judged by the standard of total world peace, although not particularly useful so far in creating victory in Afghanistan.

I'm going to make this a separate heading from Foreign Affairs, because it is an anomaly. There is a religious fundamentalist aspect to this that comes from within the USA. Obama already faces disguised racist outrage at home, and I'm guessing he thinks that the Israeli issue is best managed by leaving it alone. Not like Bush did, which was to encourage the Israelis to attack the Palestinians, and undermine his Secretary of State's attempts at fairness (Both Colin Powell and Condoleeza Rice). Obama is treading the middle line by issuing strongly worded statements about freezing the settlements, and simultaneously strongly worded statements about US support for Israel. The best Obama might be able to do is to let Hilary the deal with it, to stop it from getting worse for the next four years. No solution in sight yet for this one.

This is a separate category, because it was a major campaign promise, and the US was the only country without public health care. I call this an accomplishment so far. Obama did it by making health care insurance mandatory, instead of setting up a government run system. A private insurance health care system was the best route for Obama, because more government intervention was very unpopular in the USA, especially after the economy crashed and needed to be bailed out. Essentially, private insurance helps keep government expenses and taxes lower, while still making health care universal. By making enrollment (and payment of premiums) compulsory, Obama reduced the need to raise taxes. His opponents were not able to stop the momentum of universal health care, when it was introduced as private sector insurance reform. You may call this trickery, but it is very similar to trickery that was needed over a hundred years ago to abolish slavery.

It's an important category, and Obama is basically on the side of green. But it's pretty obvious to me he has turned his attention to other things for the time being.
Copyright the Lost Motorcyclist