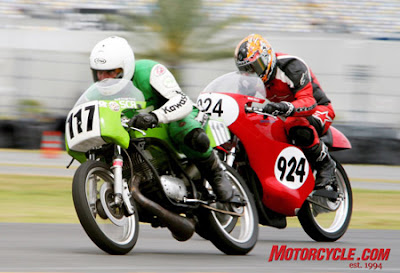 Here is a picture I got off the Internet of some vintage racers, having fun on a race track. Keep it in mind as I explain what is wrong with some aspects of motorcycling, as illustrated by a letter to the editor of Cycle Canada, printed in the July 2010 "Readers Write" section.

The editor titled it "Apocalypse, Coming Soon" which I think was a way to indicate the letter may be an exaggeration and even a little off the wall. But I think it needed a more comprehensive answer, because some things need to be said over and over as new generations of riders hit the road.

The letter is not online, so I will quote and paraphrase from it as fairly as I can. He started quoting the editor of Cycle Canada, Neil Graham, "A life lived entirely within the limits prescribed by the law is hardly a life at all". And then went on to say how he had packed it in with motorcycling and sold his bike because he couldn't live with the constant speed enforcement.

"It got to the point where I would only ride with my friend Steve who never exceeds the limits by more than 10 kph. But at those speeds my mind drifts off and I am an accident waiting to happen."

"I know it's hard to understand for those capable of sticking to the speed limits and enjoying the scenery, but for me curving pavement was the scenery.". He implies that if there is too much speed enforcement, people will stop buying motorcycles, and so the next time I am passed on my Sunday ride by a speeder on a motorcycle, "You might just have that person to thank for keeping you on the road".

I hope I have not missed too much of his letter, but if you read Cycle Canada, you can see the whole thing. My response is simply to point out many of the mistaken assumptions of this letter, and some of those assumptions themselves are what is wrong with motorcycling.

Let me deal first with this statement about living life entirely within the limits of the law. I admit that I have on occasion gone above the speed limit. As Dean says he cannot drive only 10 kph over the limit, it's too boring. Well, it's a fact that 10 kph over the limit is not "entirely within the limits prescribed by the law". So Dean may have misunderstood Neil Graham, I don't know for sure. But what he is referring to is not about obeying the law, it's a matter of how far you will go in disobeying the law.

Dean has two options to make motorcycling more interesting. One is to take it to a race track. He seems like a type of rider that could really enjoy flying around a curving track lap after lap. I probably could not enjoy it, but then I think of motorcycling as transportation first and entertainment second, and maybe sport somewhere much further down the list. Another alternative is to not buy a fast sport bike. (I am making an assumption that he owns a fast sport bike, just from the way he thinks and writes about motorcycling.) Buy a 150 cc scooter or vintage motorcycle instead, and you will find it much more interesting than driving a fast sport bike on public roads. Also save a lot of money. A vintage bike in particular gives you lots of things to think about while riding at 10 kph over. If you can make it go that fast, which requires not only driving, but also wrench twirling.

I do not agree that speeding bikers on fast machines, on public roads, are what is keeping motorcycling alive. I think it is hurting motorcycling in many ways. It would be OK I suppose if they never had an accident, never killed anyone, never did crazy stunts while riding these bikes at those speeds. But they do, and public sentiment is aroused against motorcycles, insurance rates go up, enforcement is increased. And all this is because some riders do not seem to understand that they belong on a race track with their high powered sport bikes.

Yes, I do understand that everyone can have an accident, and accidents can happen on race tracks too, but the types of accidents caused by driving very powerful sport bikes at high speeds on public roads are not doing motorcyclists any favours.
Copyright the Lost Motorcyclist