The Scooters are Coming, and What Can be Done About It 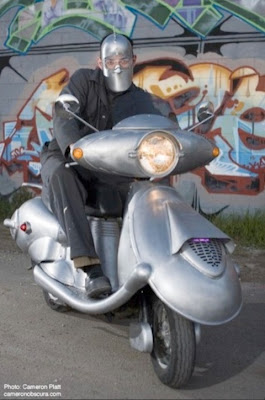 It's starting to look like scooters are taking over, and if so what can be done to stop them?

I was living during the time of the big Harley Davidson comeback circa 1985. I remember the buzz in our motorcycle club, as member after member traded in their Honda Goldwing touring bike for a big V-twin Harley Davidson. Honda Goldwings used to be the most popular bike in the club by far. We didn't know it at the time, but that would be the beginning of at least 20 years of Harley Davidson growth in market share, to the point where they now dominate the big bike market.

What am I starting to see recently, reminds me of those heady times for H-D Co. But now it is scooters. First, Mary Ann rejected my finely tuned 1970 Honda CD175 in favour of a 2005 Suzuki Burgman 400. I could understand that, as she did not like messing with the gears and clutch while driving a two wheeled vehicle. And it had space for shopping under the seat, and protection from the rain and cold. And then once we had it for several thousand kilometers, it became apparent that it was also fully capable of transporting two people on a freeway at over 110 kph.

Then, another friend, (my age) who I advised to buy a medium to small cruiser as his first bike, ended up with a sport bike. When he showed me, I wondered "Why?". He told me a sport bike, being shorter, would fit into his garden shed while a cruiser would not. OK, good enough reason I suppose, but after a couple of trips on the sport bike, he was wondering if he should give up motorcycling, as it was so uncomfortable. Mary Ann told him the Burgman was comfortable, and to prove it she lent it to him for a 200 km trip. Within a week, he had sold the Suzuki Katana 650 and bought a Yamaha Majesty 400cc scooter. And he still has it and loves to ride it.

This year, Barry bought a scooter after selling his 1400 cc Harley Davidson Dyna Sport. It's a Kymco Bet & Win 150, which he bought lightly used. A few years back, Barry was telling me he would never let somebody on a scooter ride with him. Now we ride together with these bikes: Barry's Bet & Win 150, my Vulcan 900, and Bob's Suzuki Intruder 1400. These are 200 km plus rides, and we move at a reasonable clip of 90 kph. The only question on all our minds is when will the 150cc engine blow up, since it runs most of the time at 9,000 rpm and full throttle. It has not done so yet.

Bob and I have given up on insulting the Kymco Scooter, after several months of side splitting witticisms. Today when we were at Tim Horton's in Port Dover we discussed picking up the scooter and hiding it while Barry was in the bathroom. Unfortunately (or fortunately) Barry got wind of the plot and took out his owners manual to show us the weight of the scooter, so that we would not be so foolish to attempt this in the future. It weighs 300 lbs, which is enough to give both of us a hernia even if Bob lifted 200 lb while I got the remaining 100, as was my plan.

Shortly after that botched prank, we were in the little shop called "On the Fringe" where Bob had heard that the 2010 Friday 13th T-shirts were on sale. He needed to get one ahead of time, as he has the full collection and it's really difficult to get in there on Friday 13th, and not only that they will probably run out early this year if the weather is half decent on Friday 13th. Anyway, it was a partially false rumour, as they had the women's T-Shirts but not the men's, and Bob could not be persuaded to try on the women's. But as we were leaving, I spotted a sticker for $5 that said "Remember when sex was safe and bikes were dangerous?" I remarked that this would be a good sticker to put on Barry's bike, and Bob decided to get one and put it on. That makes it an official "bike", with the sticker in place.

At the last stop on our ride, we were at the Tim Horton's in Paris, and as our gang pulled in, there was another 150cc scooter parked next to us. I asked the rider where he was going, as he had a basket strapped to the luggage rack with shoes and clothing in it. He was heading to Mississauga with his scooter, and had started from his home in London (Ontario). Also we inquired as to why there was all this duct tape over his scooter, and he informed us that it was the result of being hit three times by London drivers, who are the worst in the world, according to our friend. Anyhow he took off in the direction of Mississauga after a friendly chat, and it looked like he was going to make it. I did not have the heart to tell him that Mississauga is the road rage capital of Canada. No sooner had he left than another man with a Burgman 650 (scooter) pulled in looking for coffee and willing to brag about his bike. He had a trailer hitch, where he told us that he attached a 250 pound one-wheel trailer, and was planning to make a trip to Nova Scotia and PEI this summer. I asked him if it was his first bike, no he said, he used to have a Burgman 400 that he put 60,000 km on and then traded on the Burgman 650.

Picture: Quicksilver, a steam-punk custom scooter,just to give you an idea where scooters might be headed when designers figure out what they should look like. From this web site: