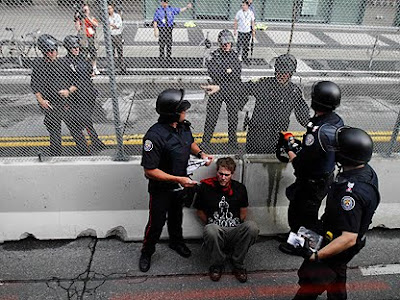 Stockwell Day put his foot in his mouth again. As a minister in Canada's ruling Conservative Party, he want us to build more prisons. But the press was making fun of him for his reasoning that, although crime stats are down, "Unreported crime" is up.

Conservatives are very big on crime, and as I recall a few years back, at a press conference with our Prime Minister, Stephen Harper, TV personality Geri Hall was subdued and led away in handcuffs. (Geri Hall is a comedian on the fake news show "This hour has 22 Minutes", which Conservatives apparently don't think is very funny.)

"Law and Order" is an issue that Conservatives take very seriously, and they use the issue to win votes. "More Jails" is a popular theme with conservative voters.

How did we get into this ridiculous stranglehold that the Conservatives have over us? It is because our voting system is archaic. So, the unified Conservative party, with only 32% of the vote,  uses our archaic voting rules to defeat four disunified left wing parties. (and calls it treason when the opposition parties attempt to form a coalition).

Most democratic countries have ways of dealing with this, by using a runoff election between the top two parties after the first ballot. The UK and the USA (and Canada) do not have a runoff system, but the US is basically a two-party state, so rarely has the problem of runoffs (notable exception in 2000). And in the UK, there is a tradition of coalition governments that apparently we are losing, or have lost in Canada.

Recently, the province of Ontario had a referendum on election reform, which was soundly defeated. Why? I think it was because the new (and complicated) system required over 40 additional members of the provincial legislature, that was unpopular with all sides.

The easiest solution would be to have an automatic runoff system, based on a two choice ballot. When you vote, you can put your first choice, and your second choice right away, on the same trip to the polls. Then the vote tabulating computers can work out not only who the top two candidates are, but within seconds of the final count, could also tell us who wins the runoff. That way we eliminate the long and expensive second round vote, and have something resembling a second round runoff.

Best of all, it would give us the kind of government that represents most Canadians, instead of this travesty of Canada as a right wing militaristic police state (albeit a nice one) run by religious fundamentalists.