Zen and the Art of Chain Lubrication 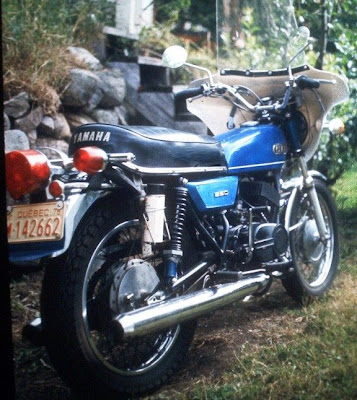 I am writing this blog because this weekend I rescued Mike's 1972 Honda CL450 that had sheared all the rear sprocket bolts. After I got it repaired I also noticed that the chain was almost seized due to lack of lubrication, and that it was very loose. Less than two months ago, I rescued the same bike, with the chain just as dry and loose, where the chain had jumped right off the back sprocket. So this got me thinking about maintenance intervals, and the expectations we have about vehicle reliability today.

Motorcycles in the not too distant past were high maintenance. That may be easing off today, thanks to maintenance free belt drives, electronic ignition, sealed batteries and fuel injection, to name only a few. But how much maintenance is enough? Some people are nearly fanatical about doing all the maintenance. Others do no maintenance at all and wait for things to break. Some take their bike to a mechanic for everything, including the most minor adjustments, and others do all the maintenance themselves.

My 1970 Honda CD175 has a chain drive, typical of almost all bikes of that era. You need to oil the chain, and adjust the tension every once in a while. According to the manual, it was "Monthly or every 1000 miles." On the other hand, the battery, oil level, and tire pressures should be checked "Weekly or every 200 miles". And here is the first problem with maintenance. Can you trust the manufacturers' recommendations?

In general, the manufacturer's recommendations are conservative, meaning that they usually say to do something more often than need. This is no big deal for the owner, unless the task is either burdensome or expensive. In most cases you can figure out for yourself that this schedule is more frequent than required, for example if you check the battery every week for a year and find out you never need to do anything, you might just ease off the inspections.

But there were some items where the manufacturer might actually be underestimating the maintenance. I suppose they didn't really care, if it is not a warranty item, and you are paying for the replacement yourself. In this case, I'm guessing the owner would be better served checking the chain more than once every thousand miles, and the battery less than weekly.

The type of chain on the Honda CD175 disappeared from the motorcycling scene soon after the O-ring chain was invented in the early 1980's. Although an o-ring chain looks like a traditional chain, they are as different as night and day when it comes to endurance, high speeds, and high power. By the way, reinforcing my theory that lubrication was the problem with the traditional chains all along.

Even back in 1970, premium brands like BMW had given up on chain drive as being too dirty, and too maintenance intensive for their motorcycles. But the cheapness of the chain drive, and its long history and tradition kept it going long past its expiry date. It wasn't too bad on the CD175, which at least had a nearly totally enclosed chain, and very little power to transmit. But when Honda came out with the CB750, it soon earned a reputation as a chain shredder. Obviously, it was time for a better way to transmit the power to the rear wheel. In 1976, the new Honda Gold Wing 1000cc had shaft drive, and soon after, all the Japanese manufacturers had their long distance tourers equipped with shaft drive. The combination of high power engines, and the high speeds of the roads at the time were simply more than any traditional chain, no matter how big, could handle. Especially so with neglect and improper maintenance.

It's almost hard to remember today how much maintenance was needed on motorcycles in general, not just those chains. Motorcycles of the thirties sometimes recommended a complete engine teardown and rebuild every 5000 miles.

We wonder today how people tolerated chains that threw oil all over the back of the bike and all over your clothes. Well, the engines back then also spewed out a lot of oil. It was actually difficult to say where all the oil was coming from, but you just knew it was not all off the chain.

Today all bikes that I know of are equipped with either an O-ring chain, a belt drive, or a shaft drive. I suppose there may be some exceptions, but you can easily buy an o-ring chain to replace a regular (old fashioned) chain, if you want to, so it doesn't matter too much what the manufacturer puts on the bike. (although the CL450 does not have space inside the cover for an o-ring chain, unfortunately.)

On bikes equipped with an old fashioned chain, I usually do the maintenance more often than recommended. This way, not only do the chains last longer, so do the sprockets. And they don't require as frequent adjustments. The down side is the oil that gets flung all over the place. So I will not wear anything but a black jacket on my CD175, or my son's 1972 Honda CL450.

Some people tried automatic chain oilers, which dripped oil onto the chain in a steady stream while driving, but supposedly shut off when parked overnight. I never found out whether these things worked, I suspect not.

Back in the early 1970's, I toured across Canada on a two stroke Yamaha 250 with (of course) open chain drive. I soon saw that the only way I was going to make it on one chain was to lube it more frequently than the "1000 miles". So I mounted a bracket on the rear carrier, where I could put a handy can of chain lube. And then, at every gas stop, I put the bike on the centre stand, spun the back tire and sprayed the lube all around the chain. It was a "quick dry" lube, that was cleaner than most. And with practice, it only took a few seconds. With this technique, I all but eliminated the weakest component of the bike when it came to long distance touring. From then on, the chain adjustments were few and far between.

Picture: This is a surviving picture of my 1972 Yamaha DS-7 2-stroke set up for touring. The can of chain lube is in a bracket near the back of the seat.
Copyright the Lost Motorcyclist