Why A Mosque Must Be Built at Ground Zero Now 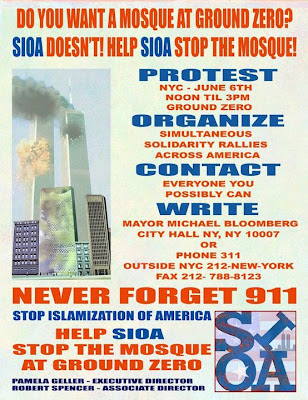 Just a reminder, I am not a Muslim, I do not use mosques at all, and I don't live near enough to NY city to use a mosque at ground zero anyway. But now after a public outcry against it, a mosque has to be built there.

Almost every time I hear someone explaining the case against building the mosque, the basic reason is because the Muslims are responsible for 9/11. This point of view seems to be gaining momentum, because shortly after 9/11, even George W. Bush did not try to blame Muslims in general, just a few extremists, and possibly some governments in that part of the world. (Iraq, Iran, Afghanistan etc.)

Now the noose of blame is tightening around the neck of the Muslim religion.

What should the Muslims do? Quietly move their mosque somewhere else, in respect for the victims and survivors of 9/11? Or should they demand that they be allowed freedom of religion, and go ahead and build the mosque?

I would recommend that they go ahead and build the mosque, and if they are prevented by law, to fight as hard as they can (peacefully of course) against that ruling. If they are prevented from building it, or forced to move, they must challenge it loudly every step of the way. And never give up the fight.

Anything else will be seen by the American people as an admission of guilt by Muslims for causing 9/11.

Pat Robertson blamed homosexuals for 9/11. What if homosexuals decided to build a gay bar 2 blocks from ground zero, and there was a public outcry against it because it was a "slap in the face to victims"? Would it be a good idea for them to withdraw quietly and build far away? No, because that would in effect be saying, "Yes, we admit it we caused 9/11 with our homosexual ways". And you can be pretty sure that is how a percentage of the American population would eventually come to see it.

Some people blamed Israel for 9/11. Would Jews be willing to shift their Synagogues a few blocks away to avoid further controversy?

Another example of backing down from a threat, this one real, not hypothetical. Toyota recalled millions of vehicles because of a fatal accident where an accelerator pedal was stuck under a floor mat. The proper response from Toyota would have been to say "It was driver error, because, in the event a throttle gets stuck, all drivers should know how to turn off the engine or shift into neutral, or use the brakes to effectively stop the car." The very most they should have done was to refund the price of the floor mat.

But instead of taking an aggressive position, Toyota submissively recalled millions of cars for "repairs", which sealed their fate in the minds of Americans. The public thinking was "If there was nothing wrong with the cars, why did they recall millions of them?" Words to that effect were said over and over again. Toyota should have fought that recall every step of the way. The recall was the same as a confession of guilt. "Yes, we deliberately produced a rolling death trap, we are so very sorry, please punish us in any way you can".

In Nazi Germany the Jews thought that by going along with the laws to prevent them from going to school or from doing business, that they would avoid conflict and more suffering. Instead they went quietly, which convinced the German people that Hitler was right: The Jews did indeed betray Germany in WW1. And in the end, you know what happened there. The Germans decided that the Jews were guilty of treason, and if they got rid of the Jews, obviously they could win WW2.

The lesson is this: if others accuse you of a horrendous crime, it is better to go down fighting than to quietly abandon your rights.
Copyright the Lost Motorcyclist