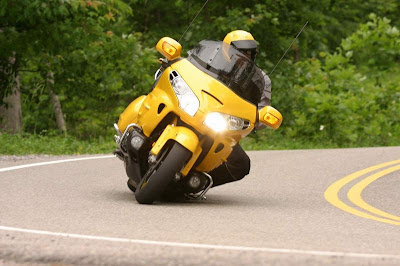 The Honda Gold Wing has had a unique place in the motorcycling world ever since its introduction. It has only been briefly challenged once as the most sophisticated long distance touring bike, but I would say that today it is solidly at the top of the heap.

When it was introduced in 1976, it had an opposed four cylinder motor of 1000 cc. Honda only sold it "naked" as we say today. That means it did not come equipped in the showroom with fairing and luggage. But aftermarket suppliers saw to it that almost every GoldWing was soon set up for comfort and hauling extra crap, for a bit of extra money.

Over the years, the Gold Wing has grown, and features have been added. The weight has gone up and so has the price, and the power, and the number of extra options.

I admire the Gold Wing as a touring machine, but I have never owned one because it is not my style. Mainly I am cheap. But also I do not like balancing so much weight at a stop, or pushing it around the garage. I'm sure Mary Ann would like the comfort of sitting in the passenger perch, in the lap of luxury, but now she has her own bike and likes that even more.

I am not trying to put down the Gold Wing at all. Because of its weight and length, it is slightly restricted in its nimbleness, its maneuverability in corners and on curving roads. But when I road tested a Gold Wing once, it seemed to be just as fast in the corners as any other bike, at least at the speeds I was able to go. A few years later, I was riding my BMW K1100LT in front of a newer 1800cc Gold Wing, and the Wing was easily keeping up to BMW through some fast corners. At the end of the road I checked over the Honda and noticed the footpegs were ground off right up to the top rubber. That Gold Wing rider was obviously used to riding it fast. A Gold Wing makes the rider feel like it can keep up with lighter and more nimble bikes. The BMW weighed about 200 pounds less. But common sense says no way can a longer, heavier bike keep up when pushing the envelope. I think if you were suddenly faced with a really sharp turn, the Gold Wing might not make it while a lighter bike may get through. But I don't have any proof of it.

Another problem I have with the Gold Wing is the sheer number of fiddly things on it to play with. The stereo, intercom, cruise control, GPS, and I'm sure there's more. I know you can add all this stuff to any other bike, but the point is, it is distracting. One of the safety features of a motorcycle is that you are forced to pay more attention than in a car. But a Gold Wing, with its sheer size, number of built in goodies, tends to isolate you from the road, and distract you at the same time.

Now if Gold Wings were feared as dangerous bikes that crashed a lot, maybe that would help their riders concentrate on the road. But no, they apparently are safe bikes that rarely crash. I suggest that is mainly due to many of the Gold Wingers being kind of slow riders. But on a twisty road, a Gold Wing does not force you to slow down the way most big, heavy, bikes do. My Vulcan 900, a much smaller bike, is far more scary going around a corner than a Gold Wing, and grounds its floorboards threateningly at much lower speeds.

What if you have a really good rider on a Gold Wing, riding with a group of other fast riders? Might that result at some point in the Gold Wing rider hitting a corner a little too fast because they were listening to the stereo, and not being able to wrestle the big bike around the corner? I remember only three horrific accidents with motorcycle journalists in the last ten years. One was at Cycle Canada in 2003, and one was at Baggersmag.com last year. I'm sure that three accidents don't prove anything, but two were on Gold Wings that missed a curve. The other was safety expert Larry Grodsky who hit a deer.

Maybe its just another chance to remind riders that there is no such thing as a perfectly safe motorcycle. And that your attention and care are always demanded. And another: Goldwings probably should not be driven as if they were sport bikes. On the other hand SUV's should not be driven like sports cars.

Here is a video of a Gold Wing being driven faster than most people could ride a sport bike. But I'm guessing familiar road, familiar bike. Without both you would have a very ugly situation. Heck even with both, a bit of bad luck, a few leaves on the road, or a truck coming the other way...