What is a Bland Vehicle? 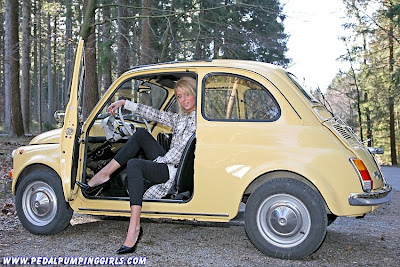 Again, to correct a mistaken first impression, this car is an old Fiat 500, and I do not consider it bland. Now for the rest of the post.

Many months ago (it seems like years!), the Toyota acceleration problems reminded us of this topic: That the fun had gone out of driving. The segue goes like this. Toyota admittedly seems to build bland cars that your grandmother would want. Because Toyotas are bland, they are no fun, and drivers get disconnected from the act of driving to the point where they don't know what to do in an emergency. What's more, as it was later shown, most of the time the Toyota drivers cause the emergency, what with pushing on the accelerator instead of the brake, and not understanding how to turn off the engine or shift into neutral.

So now to deal with this topic, what exactly is a bland car or motorcycle? Once again, I fear that most people have misunderstood, and until it is properly thought through we will get nowhere with this.

A lot of people confuse "fun car" with high horsepower. Same in motorcycling, of course. Where actually, a fun car is much broader than merely horsepower. In fact, higher horsepower in many cases can work against the fun of driving.

I will admit that there is some fun in having a lot of horsepower. There is certainly a thrill in giving a powerful machine full throttle, and feel it pick up speed quickly. In a car, your back is pressed into the seat, and you feel your head tipping back. It may be accompanied by squealing rubber or black marks on the road. With a motorcycle, you may "pop a wheelie", and stretch your arms trying to hang on to the handlebars. And the satisfaction of leaving all the other traffic behind at the light as it turns green, having the road to yourself for a few seconds. Or passing a slow car in the blink of an eye.

But extra power is also something that dulls the driving experience. Many drivers feel they need the extra power because they don't like to shift gears, or so that they can accelerate without the engine making any loud scary noises. That's right, Grandma, engines make a lot of noise at full throttle at 10,000 rpm. In my opinion an awful lot of drivers want big powerful engines so that they don't have to think about how and why the engine makes power, or how to maximize that power. In many ways, a modestly powered engine is more fun precisely because of the power limitation. It forces you to think, not just about what gear to be in, but also when to begin accelerating for that big hill, when to give it full throttle before attempting a passing move. To drive a low power engine, you need to learn about powerbands, the sound of the engine, and transmission ratios. And possibly also about maintenance, like changing the oil once in a while before the engine blows up.

One thing is for sure, that the real fun of a high powered engine comes at full throttle. Yet the more powerful the engine, the fewer opportunities you have to use it to the max. And the less you learn about driving it.

What other things can make a car or motorcycle fun to drive? I would say steering precision, suspension compliance, cornering ability are all part of it. Also, the feel of the gearshift if it is a manual transmission. Of course, I'm talking strictly about street cars here, not off-road vehicles like 4 wheel drive jeeps, where the fun may also be in getting through a muddy puddle without burying the vehicle up to its' window sills.

I still believe motorcycles are more fun to drive than cars. They do not give that sense of invincibility that cars do, but that may be a good thing in the long run. But with a motorcyclist being out in the open, they are definitely more connected with the sound of the engine, the bumps on the road, the wind, rain, or or cold that they may encounter. And they are far more concerned about slipping on a patch of gravel, or balancing the vehicle at a stop. None of those sensations are helped much by a way-too-powerful engine.

Picture: A Fiat 500, which may not have quite enough power for north American highways (or even Italian for that matter). But although a few more ponies may be welcome (true of all cars by the way), still lots of fun to drive.
Copyright the Lost Motorcyclist