What Did You Do in The War? 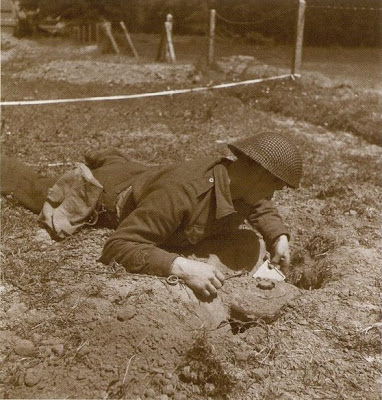 Apparently lots of people whose fathers were in the war want to know what he was doing. That's because a lot of soldiers who came back from World War 2 were reluctant to talk about it. My father died in 1994, so I am not able to ask him about it any further. So I decided to investigate with Google, starting with a few details that I do know. In my case, I knew he was in "The Royal Canadian Engineers", he was in England, France, and Holland. He spoke French, very little English, and was posted with other French Canadians. I knew at one point he was driving a Dodge Power Wagon army truck, judging from the owners manual he brought back. He did say a few things about clearing mines, so I'm guessing he did a lot of that. If I recall correctly, he said they used to find the mines using a point like a bayonet or knife, which seems to me to be exceptionally dangerous. But then he always used a knife to extract toast from a toaster, a no-no, according to the fire department. He sometimes made remarks about Bailey Bridges, which were military bridges built to move tanks and artillery when the permanent bridges had been blown up by the departing German Engineers.

The engineer's job was quite diverse, and different from regular soldiers. For one thing, the lowest rank in the engineers is called a "Sapper" not a "Private" like in the army. I guess it's the same rank, just a different word. Here is a blurb on their job in Normandy.

Some of what they did in Normandy and Holland was providing battle maps; repairing and building roads, airfields, and bridges; clearing mines, road-blocks, and other obstacles; filling-in craters and anti-tank ditches; and constructing facilities such as headquarters, barracks, and hospitals. Before D-Day, in Britain, they "built defences like beach obstacles, pill-boxes, anti-tank ditches, and minefields. They also improved British road-ways to facilitate the movement of military traffic, constructed military and air bases, and even built the Canadian wing of the Queen Elizabeth Hospital in East Grinstead."

My father volunteered early, instead of waiting for conscription. Apparently this was unusual in Quebec where the majority were anti-war. Also unusual was the choice of the Royal Canadian Engineers, but maybe that was not a matter of choice. Most recruits joined with the idea they would be fighting the Germans, not doing construction work. A sapper might even be more at risk than an infantryman, because the Germans always took special interest in firing artillery shells at them as they built bridges for Allied tanks. 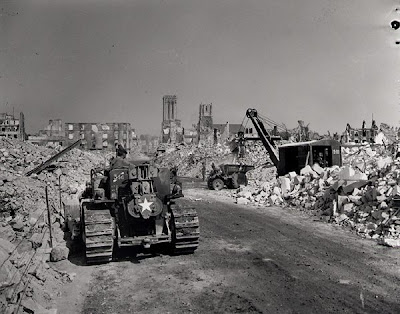 Before D-Day, Canadian engineers were involved in the Dieppe raid, but my father was not one of them. After the failure of that raid, a member of the RCE designed an assault vehicle for the engineers to use, which helped reduce the casualty rate. It was called an AVRE (Assault Vehicle, Royal Engineers), made by modifying a Churchill tank. It fired a mortar instead of a cannon, and was able to mount a bulldozer blade or a crane, or several other options.

I don't know when the first Royal Canadian Engineers landed in Normandy, but my father arrived on the third day of the invasion. They took on a lot of unglamorous tasks, including building war monuments and graveyards. However, when the Canadian Army bogged down fighting the Germans in Holland, many RCE sappers were transferred to the infantry, and got to join in with the fighting. That must have been quite a welcome change for them, given that they were getting killed anyway while digging ditches and clearing mines.

Not all men who returned from the war refused to talk about it. To get some idea of what my father was doing, I thought that some of the personal accounts on the internet might be helpful. Here is one personal story, by a sapper from the RCE, D. Charles MacDougall of Antigonish, Nova Scotia.