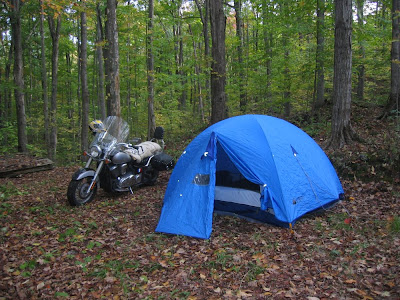 Yesterday I packed my tent and sleeping bag on the Vulcan, and went for a 150 km ride to spend the night in the forest. This is the second "Malt Run" of the year, we had 7 motorcycles along for the ride.

My philosophy on camping is that I do not deliberately intend to suffer. It rained a bit, but I have a mid-priced tent which does not let water in, if set up right. I also have a good sleeping bag, that has always kept me warm, even when the temperature drops to zero (C). If I have no passenger, I always bring along a 3" foam mattress, and a real pillow, which is very bulky. But it is a good backrest for me when riding.

My comfort-while-camping philosophy started when I was a Boy Scout. One unforgettable weekend, the Head Scoutmaster took us camping in January. We lived very far north, and none of us scouts were particularly interested in suffering any more from the winter than we absolutely had to. In other words, we wanted to stay near the comforts of home. In the end, we were persuaded. Our head Scoutmaster worked for the paper company, and he found a guide who knew something about winter camping. Our guide, Romeo, also was an employee of the Paper Company, and his job was to live in a tent far from civilization for a couple of weeks at a time, drawing up maps of the forests. Romeo's camping philosophy, as you may imagine, involved suffering as little as possible.

Romeo gave us a list of items everybody should bring, and he arranged all the other equipment. Our list said to bring (1) bearpaw snowshoes (2) A good sleeping bag, (3) pots pans, food, matches etc. and (4) of course dress warm. He arranged transportation, tents, axes and saw, and various other items that he always took on exploration with him.

One of our two assistant scoutmasters, Mr. P2, apparently did not think much of Romeo's "suggestions", and brought along his own camping equipment. I don't know what else he brought, but I remember he brought cross country skis, a wire saw, and no bearpaw snowshoes. Everyone else brought what Romeo said to bring. 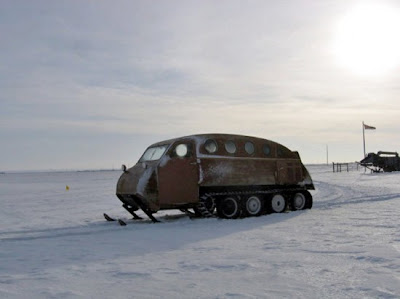 We were going to be camping in a little bay on the St. Lawrence River,at the bottom of a 300 ft. cliff. We were driven in a pickup truck to the closest point by road. Romeo had also brought toboggans to load our equipment on, including canvas tents and wood stoves to put inside the tents. The first six miles or so was fairly level, so Romeo also arranged a Bombardier 12-person snowmobile to carry us and drag all equipment behind. When we reached the top of the cliff, the Bombardier left us and we got ready to pull the toboggans down the cliff. As this point, Mr. P2 realized that his skis were of no use for pulling a toboggan. And the snow was so deep they were almost no use even walking. Plus, the climb was steep, going from one ledge down to the next, and his skis were too long to navigate this trail. So he had to follow behind on the path packed down by everyone else. So lesson number one, when Romeo says bearpaw snowshoes, bring bearpaw snowshoes. 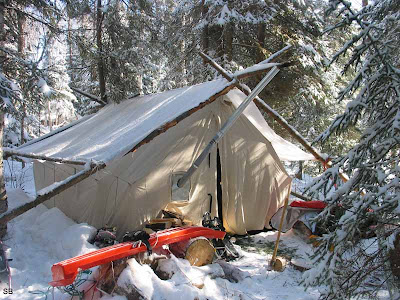 My observations continued. Romeo showed us how to set up the tents, cutting down trees for ridge poles and A-frame, and how to set up the wood stoves in each tent so as to not burn down the tent. Because we were standing on snow about six ft. deep, we laid down a bed of spruce boughs first for each tent.

There was a lot of tree cutting involved. We had not brought a chain saw, but Romeo has a cross cut saw, which he could cut through a six inch log in about a minute (if memory serves, and I certainly didn't have a stop watch.) Mr. P2 went off to cut some wood using his wire loop saw, and about an hour later had still not made a serious mark on the tree. So by this time, the cross cut saw was available, and Mr. P2 attempted to finish of the remaining 99% of the job with it. But minutes later disaster struck, and the saw blade snapped off our only cross cut saw. Romeo was not too distressed, and within minutes had punched holes through the broken saw blade and wired the two parts of the blade back together, however I noticed Mr. P2 did not use the saw after that and someone else cut the wood he needed. Lesson number 2, bring the right tool for the job, even if it's a bit bigger, and it's handy to know how to fix stuff on the spot.

That night I was given the job of waking up early in the morning to light up our wood stove for the rest of those lazy buggers. I had a really good sleeping bag, so I was warm despite the temperature going way below freezing (probably minus 20). My father lent me his sleeping bag, which was professional equipment, as my father was also an employee of the woods department and often went on these explorations. (a.k.a. paid winter camping trips). But when I woke up to put on my leather boots, they had frozen while folded over, and I couldn't straighten them out. So I put them inside the sleeping bag for about ten minutes to soften them up enough to get them on my feet. Then I went out and got the wood and started the fire.

The last day, we were heading back home, and at the top of the cliff, were waiting for the snowmobile (or snow-cat) to arrive. Our Scoutmaster wanted to boil up some tea while we were waiting and sent me with an axe and a bucket to the lake to get water. I chopped a hole in the ice, I don't know exactly how deep, but in the end I was lying down reaching into the hole, so it was probably about 4-5 feet deep, but still no water. Finally Romeo came over to see what the trouble was, or if maybe I was drowned or eaten by wolves. When he saw me reaching into the hole, he suggested I go closer to the middle of the lake, and he was right, the ice was a lot thinner. In fact, it was open water in the center, despite the cold temperatures.

In later years, I began to enjoy camping by motorcycle. Going without a guide, I often made mistakes that ended up with the tent flooded or collapsed. But eventually I guess anybody can learn how to do it and be comfortable.

Pics 1 Malt run 2007, with my tent and bike.
2. A picture of a Bombardier 12 person snowmobile I found on the net
3. A tent similar to what I remember of our winter camping tents
Copyright the Lost Motorcyclist