A Survey of the Press: James Lee and Environmentalism 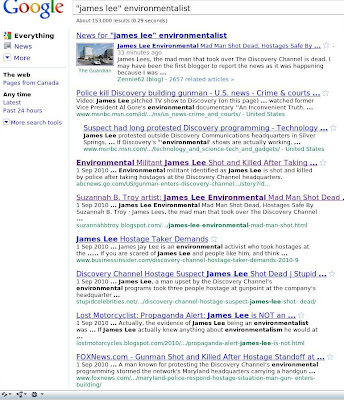 Last night, after I posted my previous blog, my site briefly rated higher on Google than Fox News. I captured it in a screen grab (see picture left).

Today I have done a survey of attitudes and propaganda about James Lee, by going to some Canadian news source websites and seeing what each had to say. First the headline, second, how a reference in the text to environment was handled, and a quick look at some comments posted at the bottom of the page.

The main Canadian websites all managed to keep "environmentalism" out of the headline. To me, this is the right way to go to avoid spreading right wing propaganda.


CTV News:Police kill gunman who held 3 at U.S. Discovery Channel
..."He said he was inspired by "Ishmael," a novel by environmentalist Daniel Quinn and by former Vice-President Al Gore's documentary "An Inconvenient Truth.""...

The National Post: Man who held hostages at U.S. Discovery Channel shot and killed
..."The gunman, who apparently objected to the TV channel’s environmental coverage, died,"...

The National Post web site did not call James Lee an environmentalist, but the commenters to the article certainly did. They seem to be mostly right wing - anti environment, pro war etc. By comparison, the CBC website comments I would say are far more balanced, I saw only one poster on the CBC site assert that Lee was some kind of eco terrorist.

..."Lee, a 43 year old Californian with a seemingly religious fervour for his environmental causes,"...

Of all the unsolicited comments I saw, this one below takes the prize for most obnoxiously right wing, and was posted on the Fox website. This Fox News reader makes James Lee seem almost rational.

LIBTARDHATER67 Sept 2, 9:28 AM
"This guy was a worthless libtard! Too bad he is dead, I would have wanted him to know the last time I went hunting I took my last 4 oil changes from my pickup and my last 2 from my ATV and dumped them in the stream where I was. I was visualizing some crying libtard's face when he saw it. Then I killed two more bucks than I had tags, kept the largest and left the other two to rot. Take that, libtards! I hate the "environment"! We humans have the right to do anything we want to the environment."

(I don't understand why, but the previous comment only came up on my Opera browser and not Firefox.)