Propaganda Alert: James Lee is NOT an Environmentalist 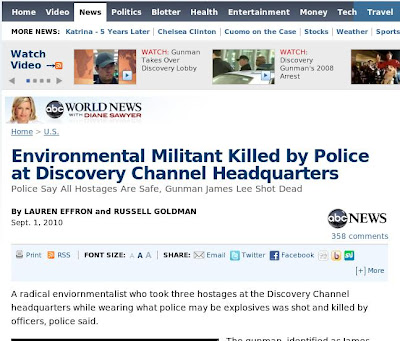 According to ABC news "A radical environmentalist who took three hostages at the Discovery Channel headquarters while wearing what police may be explosives was shot and killed by officers, police said."

I am asking ABC News to retract this blatant lie about environmentalists. Even if it was actually true, that James Lee was an environmentalist, it would still be propaganda to link the environmental movement to someone who went nuts and tried to take hostages.

What is the basis for calling this deranged person an environmentalist? Did he ride a bike to the crime scene? No. Did he recycle all his left over pop cans? No. Is he a vegetarian? Maybe. Does he keep his air conditioner up at 78 degrees? No. Does he belong to the Audubon Society? No. Does he contribute money to the "Save the Whales" campaign? No. Was this action part of a Greenpeace protest? No.

Actually, the evidence of James Lee being an environmentalist was taken from his website manifesto. This manifesto actually has a lot more in common with Glen Beck's Teabaggers than it does with the Environmentalists

He suggests putting a game show on the Discovery channel to give ideas on how to live without giving birth to more "filthy human children", since those new additions "are pollution". Environmentalists have never used to word pollution to refer to anyone's children or babies.

"All programs promoting War and the technology behind those must cease" That would be a pacifist position, not environmentalist. By the way, pacifists who use guns and strap explosives to their body are also rejected by the pacifist movement.

"Immigration: Programs must be developed to find solutions to stopping ALL immigration pollution and
the anchor baby filth that follows that.... FIND SOLUTIONS FOR THEM TO STOP THEIR HUMAN GROWTH
AND THE EXPORTATION OF THAT DISGUSTING FILTH!"  (that is pure right wing racist stuff, not on any environmentalist agenda I know of. But a very popular point of view with the right wing.)

"Develop shows that will correct and dismantle the dangerous US world economy." Too general to distinguish between right and left economics.