Jesus is In It to Win It 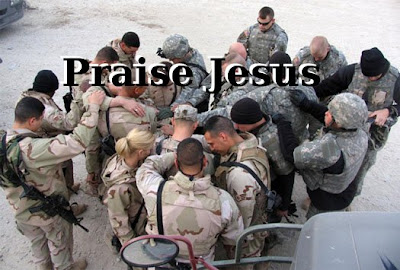 Before I begin, I am not a believer in the pro-war Jesus.  So read this in light of the fact that I do not think it is right for pro-war Christians to boast of their peacefulness, while ignoring Jesus's messages to love those that hate them.

Pro-war Christians argue that Jesus came as a strong warlike God, not as a wimpy pacifist. You can take a look at the web page I linked to here, to see many arguments for a warlike Jesus, and to re-interpret everything Jesus said in light of right wing pro-war conservatism.

Now, the rest of this blog is what I might think if I was hypocritical enough to believed in a pro-war Jesus.

>I kind of like the idea of Jesus as a winner, leading his troops to victory over the heathens, and not a pathetic loser pacifist. Once all the liberal crapola is removed from the Gospel of Jesus, I finally do get His message,

The Short Version of the Gospel According to Pro-War Jesus

Once upon a time, God looked down from the heavens, and decided that His people of Earth were not powerful enough or rich enough, so he sent his only begotten son to restore their God given lifestyle. Jesus came to Earth, with the good news "Get yourself a sword" (or a gun, in case they have been invented by the time you read this).

Jesus taught us these important words in his Gospel:

34 Do not suppose that I have come to bring peace to the earth, but a sword (New International Version, NIV)

36 [Jesus] said to [the disciples], "But now the one who has a purse must take it, and likewise a bag; and the one who has no sword must sell his cloak and buy one." (New Revised Standard Version, NRSV)

Then Jesus went into the temple and overturned the tables of the money changers. By this one example, we know that God wants us to act aggressively to get what we want.

Then Jesus performed miracles etc. to prove once and for all he was God.

In the end, sadly Jesus was crucified. At first it looked like He was just another loser in a long list of losers posing as God, but no, that turned out to be the final victory for Jesus, because he only died for a three days then came back to life with even more superpowers. And better yet, by being crucified, He pre-paid for all of Man's future sins. So Christians became powerful and rich, as God intended. And if any sins were committed along the way by true Christians, Jesus had already paid for them. Praise the Lord.

Now about that "turn the other cheek" slogan that pacifists are endlessly spouting off about. That is another teaching from Jesus, frequently misquoted by liberals to promote appeasement, light sentences for rapists, and pacifism. If you liberals knew anything about Biblical times, what Jesus actually meant was: if somebody strikes you on the cheek, they obviously used the back of their hand as an insult, therefore by turning the other cheek, you force them to strike you with the FRONT of their hand, meaning that you are now an equal. In Biblical times, that meant you were free to pound the crap out of them.

But Jesus was a very clever God, so he gave this quote a double meaning and two purposes. The other reason Jesus gave this quote is so that, in the future, if Christians want to lure their enemies into a trap, they can use this quote out of context. That way, Christians can speak of their Lord's desire for peace, and then when the enemy comes to the peace talks, the Christians can ambush and slaughter them.

Is this a great religion or what?
Copyright the Lost Motorcyclist