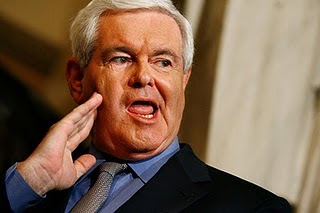 Recently there was a blatantly racist comment on Obama by Newt Gingrich. Check this website "obamareleaseyourrecords.com" Gingrich described Obama's behaviour as Kenyan. Racist theory says that having one drop of black blood in you will make you an inferior being, and hamper your ability to think rationally. Racists believe only pure white blood will make you a rational intelligent human.

OK that's all I want to say about why his remarks are racist. Now to get down to my purpose here, which is to show how it makes more sense to turn around this propaganda against the people Gingrich supports.

Here is his quote:

“What if [Obama] is so outside our comprehension, that only if you understand Kenyan, anti-colonial behavior, can you begin to piece together [his actions]?” Gingrich asks. “That is the most accurate, predictive model for his behavior.”

The statement makes no sense, because Obama was raised by white grandparents, and was not taught about anti-colonial ideas by his father. Here is the reverse, where the assumption is that Obama is rational, and it is the Republicans who are batsh*t crazy:

“What if [The Republicans] are so outside our comprehension, that only if you understand southern Slave-owning Racists behavior, can you begin to piece together [their actions]? That is the most accurate, predictive model for their behavior.”

“I think he worked very hard at being a person who is normal, reasonable, moderate, bipartisan, transparent, accommodating — none of which was true,” Gingrich continues. “In the Alinksy tradition, he was being the person he needed to be in order to achieve the position he needed to achieve . . . He was authentically dishonest.”

“I think [the Republicans] worked very hard at being a party that is normal, reasonable, moderate, bipartisan, transparent, accommodating — none of which was true, In the Nixon tradition, they were being the party they needed to be in order to achieve the position they needed to achieve . . . they were authentically dishonest.”

Notice first how easy it is to turn it around, and how it even ends up making more sense that way.

Picture: From the same website. "Obamareleaseyourrecords" By the way, it's not really about where he was born, and everybody should know it. The Republicans are just not allowed to say it's because he is partly black, because racism is unpopular with undecided voters.
Copyright the Lost Motorcyclist