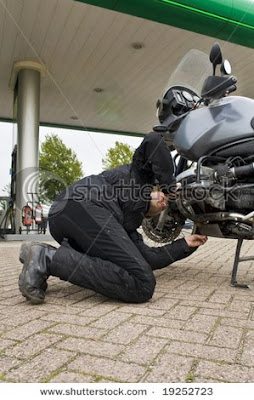 The subject of the perfect bike comes up quite often when people are shopping for a motorcycle. The types of imperfections you find in motorcycles today tells you bikes have come a long way.

In the bad old days, even brand new motorcycles leaked oil and gas, or sprayed it all over you while riding, they wouldn't start (or broke your leg with the kick starter), the electric system failed regularly, the vibration at speed would shake your fillings out and break parts off the bike. In those days, the idea of a perfect bike seemed impossible. Riders were happy if the things would just work and keep the engine oil inside the engine and the air inside the tires.

Today motorcycles must be approaching perfection, because the complaints are starting to sound petty. What types of problems do motorcycles have today?

I have a 2007 Kawasaki Vulcan 900. It does not leak oil, it starts every time with the push of a button, nothing has gone wrong with it in the first 40,000 km and three years. In fact it has never darkened the dealer's door since I drove it away as a new bike. It is fast, clean, fuel efficient. I guess it is good enough to now consider the "imperfections".

Here is my first nomination. It is difficult to check the oil level. Yes, they have provided me with a sight glass so that I can see the oil level at a glance without having to get my hands dirty wiping a dip stick. But the sight glass is very low, and I need to almost put my head down on the pavement to see it. That alone might not be an imperfection, BUT the bike must be upright and level to see the oil level in the sight glass. And I have to sit on the seat to make the bike upright, because it has no centre stand, just a side stand. So I guess I need another person to help me, or I need some kind of external jack or supports. How do you do that when you are alone at a gas station in Moose's Armpit Saskatchewan?

My second nomination, also for the Vulcan 900. Very often I try to change the bike into sixth gear and it won't go. Take it back to the dealer, you say, and they will fix it for free. No, they won't, because according to them this is normal, as the bike only has five gears. Well that stinks, says I, because I was trying to get it into sixth.

Here is the real problem as I see it. Although the engine is comfortable in fifth gear at any speed above 60 kph, I do not know for sure it is in fifth gear, I think it might be in fourth. There is no gear indicator on this bike, like there was on my last one. But going further back, I did not have this problem with my older bikes, because in top gear, the gear selector lever was loose in the highest gear, and all I had to do was put my toe under the lever and if it moved freely, I knew it was in top gear. So I didn't really need a digital gear indicator in front of me. But the Vulcan's gear lever feels the same in every gear. If I could count, this would be a non issue, but I have other things on my mind. Well then, why not look at the tachometer to see what gear you are in? There is no tachometer on the Vulcan. OK, so why not listen to the engine? Because apparently my musical ear is so tone deaf that it cannot distinguish between fourth and fifth gear.

So the missing sixth gear has become an imperfection. To be fair to Kawasaki, if they did add a sixth gear, I would simply start complaining that there is no seventh gear, so they wisely ignored customer complaints on that one. I considered adding an aftermarket tachometer to the bike, but then I discovered a solution that is free and requires no additional complexity. All I need to do is look in one of my rear view mirrors at the headlight of the car behind me at 100 kph. Although there is not much vibration, there is just enough to blur the mirror a bit, and if I look at the headlight in the mirror, I will see the light make a distinct pattern because of the vibration. In my case, the headlight makes a perfect vertical oval at 100 kph. At 90 kph, and 110 kph, the pattern is a horizontal oval. And so now I can tell which gear I'm in without trying to change one more gear and wearing out my clutch fingers.

And now the Vulcan 900 is one step closer to perfection. But what about the oil level? I never check the oil any more, because like I said, the Vulcan doesn't leak any oil, and it doesn't burn any oil, so according to the Law of Conservation of Mass, that level will just stay the same.