Explaining America to the Rest of the World: "Koran Burning" 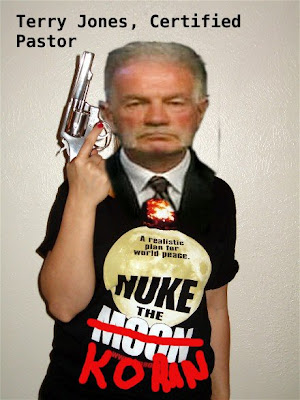 Sometimes, a story in the media is lost in translation as it goes from one country to another, where language, history and culture are different. This headline is an example:

"Pastor Terry Jones, of the Dove World Outreach Center will Burn Korans on 9/11"

Let me explain each point of this story for non-Americans. (Actually I'm not an American myself, but it is becoming clear that one of the main uses of Canadians is to translate from "Americanisms" to "Rest of the world language" and vise versa.

Let's start with "Dove World Outreach". In America, the second word, "world", does not mean the same as what foreigners think it means. "World" simply means whatever Americans want it to mean. For example, the "World Series" of baseball does not mean the rest of the world participates. In football (soccer), "World Cup" means the rest of the world does participate. So "World" to Americans sometimes means only the USA, or occasionally, the USA plus some foreigners.

The first word "Dove" may also be a little confusing. A Dove is a universal peace symbol. But Americans do not see "peace" the way other people do. To Americans, peace is more or less synonymous with "Superior firepower". This of course explains why all the members of the "Dove World Outreach" carry loaded pistols.

The last word is also a bit different. To most people, "outreach" implies to reach out and help other people. To Americans, it also can mean if help is not accepted to at least "send a message" that if they do not accept help, their behaviour will not be tolerated.

So now we have taken care of the first three words. Hopefully, things are beginning to make sense.

Now the most important word, "Pastor". In America, a Pastor can be anyone with ten dollars and an internet connection. You do not need to be "hired" by a Bishop or Pope or Imam. You also do not need followers, although it's a nice to have, and adds a little credibility. But the followers can be your wife and kids for example. You can also have followers by getting a TV or radio station or a website. Anyone who can hold a sign or sing or make comments on a blog or shoot a gun, can be a useful follower.

Second thing about American Pastors. Everywhere else in the world, a religious figure has a boss to answer to. Not in America, where people and religions are free. In most countries there are at most a handful of religions. In the USA, there are over 40,000 more-or-less independent religions often referred to as "churches".

The last aspect of being an American Pastor, that needs further explanation. Pastors do not need an education either. I really don't know what the minimum requirement for a pastor is, and not to insult my friends and relatives who are pastors, but I don't think there is a minimum requirement (except maybe for having a pulse). That is not to say there are no really good, educated, brilliant pastors. It's just that in America, unlike the rest of the world, there is no minimum requirement.

Finally, the phrase "book burning". Everyone must understand that to Americans, burning stuff is not as horrifying as it is in other parts of the world. Americans do not feel strongly about waste, like many other countries do. Americans regularly burn garbage in their back yards without a permit. Garden waste, brush, and household garbage including small T.V.s, disposable diapers, and Dixie Chick CD's have been burned . It is my belief (I have no proof) that even bibles may have been burned along with other books in the trash. The only thing no American is allowed to burn is the US flag. But since US flags are burned frequently in the rest of the world, then some Americans don't see why there is a problem burning the Koran in the USA. (except that for some reason the rest of the world thinks it is a problem). At any rate, Korans have already been burned and flushed down toilets, so why would anyone would care about a few more.

On the other hand, some Americans associate book burning with the Nazis. So they are conflicted about the symbolism. But then it's also important to remember that not all Americans are alike. You have the entire range from insane redneck racists, to liberal pinko fag pacifists, and everything in between, even including many well educated world travellers who can even speak French or other foreign languages.

So now everyone can understand the context of the headline "Pastor Terry Jones, of the Dove World Outreach Center will Burn Korans on 9/11". Apparently he decided not to in the end, but there are plenty of other crazy pastors out there, so don't be surprised.

Picture: One of my photoshop efforts. It is Terry Jones' head on the body of a girl with a handgun and a crazy T-shirt. I crossed out MOON and substituted KORAN, and I put the words at the top of the picture.
Copyright the Lost Motorcyclist