Why Sport Bikes are Uncomfortable 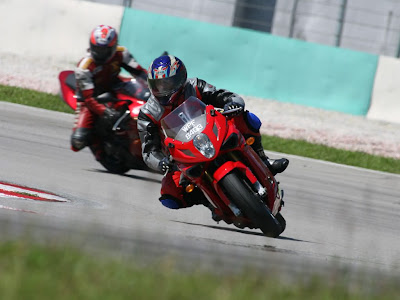 ..."riders that like to ride fast through twisty roads don’t need to be hunkered over the gas tank the way a racer does on a 180 mph straight-away."... "Perhaps, it took supermoto to remind us all that going fast is not inconsistent with an upright riding position"..." I can’t help but think that most riders feel a greater sense of control sitting upright on a motorcycle."

I did not know that some people were of the opinion that you need to lean forward to go round a corner, and it is simply not true anyway. The only reason I lean down to go around a corner is if I am on my Honda CD175, taking a corner at top speed, and maybe against a headwind and going uphill. In the old days racers used sit up for the corners. These days it is more common for them to hang off the inside of the bike on the curve.

There are some good reasons for leaning forward. One is to combat the wind force, or to tuck in behind a small fairing to reduce wind resistance. Another reason is to resist being thrown backward by fierce acceleration. I think it is safe to say that most American motorcyclists do not worry too much about wind resistance. Sure, it may mean a few mph off the top speed, but hardly anyone goes top speed on the street. And it may mean fewer miles per gallon, but again, most riders are not that worried about fuel economy.

When going around a corner, wind resistance is not important, but these things are: Seeing where you are going, keeping things from dragging on the ground (feet, parts of the bike), keeping wheels from lifting off the pavement, and good control of the handlebars. The exception to the rule about not dragging stuff may be racers who like to get the knees down (equipped with slider pucks) or dirt oval racers who have steel soles on their inside shoe that they slide on the gravel surface for stability. But on the street you should not be doing that kind of stuff.

Sport bikes have a riding position with the rider hunkered forward over the gas tank. This position makes sense in a race bike, because you cannot make compromises if you want to win. Leaning forward reduces wind resistance, reduced wind resistance means more speed, and races can be won with hundredths of a second. The only time you can afford to sit up in a race is when you are slowing down. If you are in a race, and sit up, your bike will slow down. Maybe only a few miles per hour, but that is quite enough for a competitor to pass you and win the race. So no matter how uncomfortable it may be, you must keep down out of the wind if you want to win.

A street bike is not always run at full throttle with a competitor trying to get by. On a modern bike, in traffic, if you want to go faster, usually you twist the throttle a little more. Again there are exceptions, where a small 100 cc street bike might actually need to be run at full throttle most of the time, and so it would benefit from the rider hunkering forward over the tank to reduce wind resistance.

There is actually one more reason for leaning forward on a racing bike. When accelerating at full throttle, which you are doing at least half the time, you need to keep some weight on the front wheel to prevent it from coming up in a wheelie. If this was the only problem, it could be fixed with a redesign of the frames, but there is also the need to counteract the force of acceleration itself, trying to pull the rider off the bike. So with the wind and acceleration together, the rider feels well balanced leaning far forward on the motorcycle during a race.

On the street at low steady speeds, the racer riding position puts a lot of pressure on the hands, and on the muscles that hold the head up. That is the reason for most of the complaints about the comfort of sport bikes. The other comfort related issue is how far the knees are bent, which is actually to keep the feet from dragging in hard corners.

One other complaint surfaces from time to time, but I do not consider it to be only a sport bike complaint. It is the hard seat. Many bikes of different types have hard seats, and it really has nothing to do with the type of bike.

Are there any solutions to the discomfort of sport bikes? One is to take pain killing medication and physiotherapy.   Another is raising the handlebars. Even a little rise can get air under your torso and relieve wrist, hand, and neck pain. Lowering the footpegs can help the knees, if that bothers you. But if you are bothered by all of the following: wrist, hand, neck, knee, and rear end pain, maybe a sport bike is not for you.

Link: Here is a bike that apparently is leaning into a corner with both wheels off the ground: