Who Promotes the Gun Culture: Liberals or Conservatives? 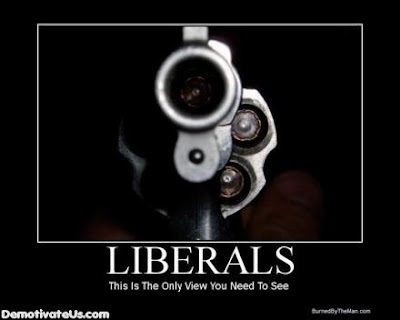 I came across what seems to be a reasonable creationist, making a statement about James Lee, the hostage taker at Discovery Channel. In his blog, he had these words:

"before anyone gets too smug about how Darwinism leads to violence, let's remember two words: James Kopp. You know, the guy who bought a sniper rifle and assassinated abortionist Barnett Slepian? The fact is that deranged people do violent things because they're deranged. Darwin no more caused Lee's violent acts than the Bible caused Kopp's."

Well at least no one can accuse blogger Todd Wood of being one sided. On the other hand this was the first time I heard that Darwin causing James Lee to buy a gun and take hostages.

But now I have a name, let me try to compare the two acts in several different ways.

1. James Kopp killed someone, James Lee did not. You may think this is splitting hairs, or that this is unimportant. But there is a fundamental difference in what these people did. Both were arguably deranged, but one was also a murderer. Pointing a gun at someone is not the same as shooting someone in cold blood.

2. Nobody directly or indirectly incited James Lee to do anything.

3. There has been no support shown for James Lee's methods or even the terms of his manifesto after the fact. There was support for James Kopp even after he killed the doctor.
http://my.execpc.com/~awallace/herokopp.htm

4. Kopp is not the only killer. There were other incidents, such as the bombing of abortion clinics on the other side. Also, at least one other abortionist was murdered, Dr. George Tiller (I think it was May 2009) Also Dr. Tiller had been shot and wounded before. Let's not forget John Lennon being murdered by a Born-Again Christian, incited by other people in his church.

5. James Lee threatened The Discovery Channel, which was supposedly on his side, whereas James Kopp murdered Barnett Slepian who was an opponent of his.

So in the final analysis, Todd's assertion is true. Darwin did not cause Lee's violent acts any more than the Bible caused James Kopp to commit murder. But on the other hand, nobody supported Lee's idea of pointing a gun at someone. Many creationists supported James Kopp's actual act of violence. And other creationists have carried out other murders.

So if somebody says James Lee is equivalent to James Kopp, what they are saying in an underhanded way, is that Darwinism and Environmentalism did something to incite James Lee. 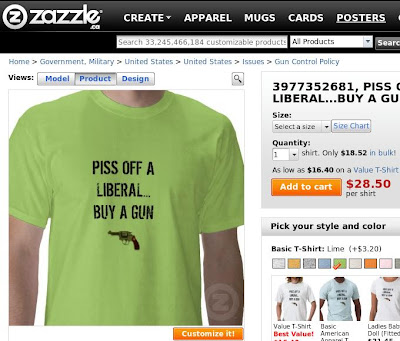 These two events are not equivalent. There is still the clear rhetoric of incitement, and the evidence of other acts of violence incited by the right wing (and religious) extremists.

I think the evidence is solid that the right wing extremists are doing the overwhelming amount of violent incitement, especially with the use of guns. Another clue is that the left has been trying to pass "Hate Laws" making it illegal to incite violence, while conservatives oppose such laws. Nobody bats an eye when right wing Christian TV Evangelist Pat Robertson calls for assassination of opponents publicly on television. Have you ever heard Michael Moore or Al Gore calling for the assassination of anyone?

In my opinion, with the gun-happy culture in the USA, promoted by conservatives (including Christians) , it's surprising that more people have not turned to guns as the answer. You can hardly turn on a TV without seeing people waving guns at each other.

Here is a blog on the consequences of violent conservative rhetoric.