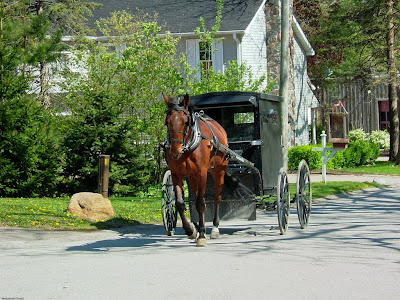 Floradale is about a 15 minute drive north of Waterloo, and is such a low-key place that I have never even driven through there, and I've lived here for thirty years.

So Mary Ann decided we would ride there for breakfast this morning. She heard that was a small cafe called Bonnie Lou's now opened in the old general store. We took her scooter for a ride to Bonnie Lou's, which was easy to find, even though it is not on Google Maps, it was smack in the middle of town. Just where you might expect an old general store to be located. And the town has a population of only about 500, but looks very well established. We circled around to the back to park, and found there was an outdoor patio and an entrance at the rear.

The waitress was wearing Mennonite dress. Well, maybe I should qualify that. I'm not sure it was Mennonite, because maybe everybody in town dresses that way. And she wasn't really a waitress because you ordered your food at the counter. But she did come over to our table to ask us if we were new and if we had come in on the scooter, which she saw come down the main street then drive to the back of the building. A good guess, I thought, as we left our helmets on the scooter. But in a town this small, and non-touristy, it is very hard to remain incognito. Floradale is in Mennonite country, and many old order Mennonites use horse and buggy to get around, instead of a car. And during breakfast Mary Ann was musing on how she probably wouldn't mind being a Mennonite, and I think she's got that just about right.

Anyhow to get back to our waitress, she told us that we needed to go to the counter to order, which we did. We both got a 2-egg breakfast with bacon and toast. Then I got a coffee and rhubarb torte for dessert. The food all seemed home made and very fresh, and later on I found out why. After breakfast, Mary Ann wanted to take a walk over to the dam, because there is a trail called the Lion's Trail around the dam and reservoir. But just when we got our jackets and helmets locked up, Mary Ann remembered that she needed to ask what day they were open for dinner. Usually they are breakfast and lunch only, but it turns out Friday they have dinner too, which they call supper. On the way back inside, she met a Mennonite looking lady coming out, and as Mary Ann is wont to do they struck up a conversation which led to the Mennonite Lady, who I will simply call ML, leading us through the back yards of Floradale back to her house to show Mary Ann her vegetable garden, which is of huge interest to Mary Ann. Also of some interest to me, as many of the sticks used to tie the row strings are old brushes, spatulas, and even old steel wrenches! As ML said, they don't throw anything out.

I was more interested in ML's garage, where there was a buggy parked, and behind that was a horse. ML also does repairs to soft topped buggies and she took us in to show us her workshop which included a commercial electric sewing machine, and lots of Naugahyde and velour, and what looked like leather. Also she had a buggy body in for restoration, and was showing me the work she had done so far and it was fantastic with the velour cloth inner liner finished already. I got a chance to really appreciate the craftsmanship that goes into the buggies, which rivals that of bikes found at custom bike shows (in some cases). From a distance the buggies all look kind of similar but apparently there are huge differences close up.

ML also showed me several diaper bags she was making out of Naugahyde, and honestly they looked as good or better than any commercial motorcycle luggage, including the standard saddlebags on my Vulcan 900 LT. She also sells those at the market. I would be tempted to buy them to use as motorcycle saddlebags but they were a bit small.

We also looked at the horse, and I was told that this was a new horse they purchased just two years ago, as the other horse was a bit small for this buggy. The way she talked it was almost like listening to a Harley rider discussing why he swapped the motor in his 883 Sportster for a 1200 cc V-twin. She also explained that the bigger horses were very much sought after by the younger men, because they "like to go faster". I guess people are the same everywhere.

Then she gave us a lettuce head from her garden, took us upstairs to see a quilt she was finishing for sale at the market, and gave me a review from the Kitchener Record, by Andrew Coppolino, about Bonnie Lou's Cafe. And she told us that the rhubarb for the torte came from her own garden, and that she made pies for Bonnie Lou, and was starting to make butter tarts as well.

We never did see the Lion's Trail, but that fits in with Mary Ann's travel philosophy of "Go with the flow".

Picture: As usual, I didn't have my camera, which was actually a good thing as I'm sure it would have spoiled the experience completely. Anyhoo, this here is a picture of a Mennonite buggy in West Montrose. Except that ML's horse was black, it's about the same.
Copyright the Lost Motorcyclist