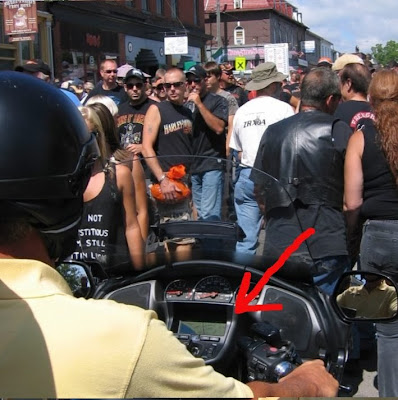 Yesterday, I was in Floradale for Thursday the 12th, and today I went to Port Dover for Friday 13th. I am going to suggest that Floradale and Port Dover get together and enter a competition to find the world's most dissimilar towns. Floradale is a bit smaller than Port Dover, and is in a Mennonite area where you can find lots of horses and buggies. People dress like Mennonites, and the general store sells whatever you need to look like that.

People in Port Dover dress in T-shirts with skulls on them, and leather jackets and assless chaps, with tattoos up and down their arms and probably a lot of other places I didn't look. And you can also buy all the stuff you need right there in Port Dover. I got a Friday 13th t-shirt with a skull on it for $20.

In Floradale I did not see a single police person. But I was pulled over at a checkpoint 80 kilometers from Port Dover, to make sure my papers were in order and my bike was safe. Nobody seems to care if I have a safe, documented bike when I visit Floradale.

There was not much of a line up for food in Floradale. But the lines for Tim Hortons in Dover went around the block (probably more than once). In Floradale, there is no one holding up a sign, telling you to park on their lawn for $10.

There is one place in Port Dover where you might actually think you were in Floradale, if you ignore the hordes of bikers pressing by like sardines outside the window and the huge yacht docked in front. The place is called "Apples" a family business that sells apple fritters with real apples, just peeled on a real 19th century apple peeler. And it may be the only place in Port Dover today where there is no lineup to get service. Maybe I was just lucky to get there at the precise moment where there was a lull. But I have never had that kind of luck at Tim's. There is no Tim's in Floradale.

We were walking back to the bikes and I got separated from my friends for second, when I got cut off by a Gold Wing. I was walking behind this Gold Wing that was trying to cut a path through the crowd in the middle of the street. I followed it on the theory that it would help me walk more easily through the crowd to have a wide motorcycle in front of me shoving people to the side. But then it turned out that Gold Wings are no good at getting through crowds because their engines are too quiet. Then I started to suffer from exhaust fume inhalation, so I decided to pass, (I feel the same way whether walking or riding) just when the Wing made a turn in front of me. Those things are so heavy it could have killed me even at half walking speed. I got out of the way, but by that time I lost track of the rest of the motorcycle gang. So I had to meet them back at the bikes.

For the rest of the day, our entertainment was watching Garry try to stuff his jacket under the seat of his Honda Firestorm. After many tries, and a huge amount of pressure, he finally got the seat to latch. But if that seat catch ever lets go when he is sitting on the bike, he will need a parachute on the way back down.

Picture: You can see Alex in front of the Wing with the ZRXOA t-shirt (ZRX Owners Association), and the Goldwing making no impression on the crowd in the middle of the street. I am trying to pass but just then he made a right turn and I had to step back and lost the group. The red arrow points to the GPS that is being no help whatsoever. Maybe it should be programmed to yell "Get out of the way!" in various voices and accents.