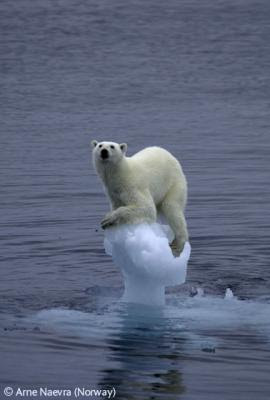 Recently I read that public opinion has shifted away from Global Warming. What happened?

Here in blue, underlined is a link you can click on to see an article from February in the Globe and Mail by Margaret Wente

Public opinion is important in the global warming debate, because without it, nothing will be done. The more public support, the more can be done. In the unlikely event every single person on earth changing their lifestyles, we might even be able to avoid the problem altogether. It isn't going to happen, but it would be fun to see everybody in North America riding a bike to work.

The scientific truth about global warming has nothing to do with public opinion, so let's keep that in mind, too. Whether or not people "believe in it" will not change the facts, either way.

Although I happen to believe that global warming is real, I want to put aside my own beliefs for a moment to consider how the vast majority of people think. Let's say we had an extreme event like, for example half of San Francisco burned in a forest fire, or all of Kansas ended up under ten feet of water. I can almost guarantee that many more people would start believing in global warming. That is how people think, they need to see extremely scary weather events. On the other hand, if we get a cold winter in Washington DC, it may spell the end of any serious concern about global warming until the next weather disaster.

Here is another more recent article on Global Warming that I found in the Montreal Gazette.

Weather events are always shifting public perception. We have had a few disasters recently, and we may get more in the future. Who can say how big a disaster will have to be before the majority of ordinary people get panicked into doing something?

People change their minds in the face of once-in-a-lifetime floods, forest fires, heat waves, droughts, hailstorms, hurricanes etc. Even if there was no connection at all between global warming and some hypothetical unprecedented extreme events, the effect of weather disasters is to stampede the masses into some kind of belief.

Scientists are just now coming to grips with the problem of fickle public opinion. First they must understand that they actually may need to promote their theories to the public. And then, the need to figure out what strategies are to be used, and who is going to direct and pay for the publicity campaign. Science is up against a well organized and funded propaganda machine that fights against scientists with fully owned TV networks and newspapers, and a budget probably in the billions (judging by the size of ordinary ad campaigns). As scientists are not really that well organized, or funded to fight a PR campaign, they become somewhat frustrated and occasionally use cynical language, and a few come off as being not-nice people. Also there are some genuine scientists who are genuinely not-nice people, and maybe are kind of greedy too and seek fame and status. None of these scientists are helping the cause. Even Al Gore himself drives in a big car and takes airplane rides to the far corners of the Earth.

You can get some idea of what people believe when they deny global warming from reading the comments at the bottom of the Gazette article. I listed a few here with my opinions in brackets

Weather is not constant (true)
Global warming was invented by Al Gore (False, that was the Internet)
Fear of climate change is akin to ancient superstition and human sacrifice (true, though it does not change the facts)
Global warming is caused by changing tilt of the Earth (I suspect this is just plain stupid)
It is "Agenda 21" and "The Club of Rome" (This may be delusional)
Global Warming is a scheme to make the rich get richer through Green Industries (true and false i.e the assertion makes no sense)
CO2 is only 1% of greenhouse gasses therefore it couldn't possibly have any global effect. (Flawed logic)
We deserve to be wiped out (Semi religious point of view)
It was predicted by the Mayans and Aztecs in the film 2012 (Some people are more affected by movies than actual weather)

Picture: Do I need to say that this picture proves nothing scientific about global warming? But it does have some propaganda value to some people, apparently.
Copyright the Lost Motorcyclist