How to Live Through A Bombing 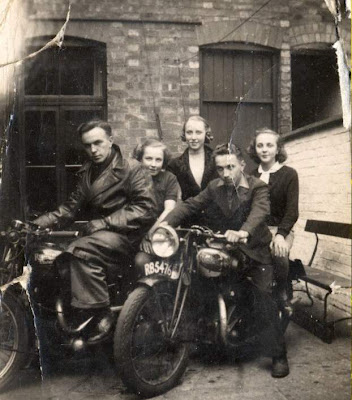 I have never lived through a bombing in Canada like the one on 9/11 in New York. But I do know someone who lived through the World War 2 bombing in England, and she does not seem to be anywhere near as crazy as some right wing extremists in the USA. This person is my mother, and until recently I had not taken much interest in her experiences in WW2. So I asked her to fill me in on what happened the day they were bombed out of their house, and I thought I would put this in my blog, because it's kind interesting.

My mother, Joyce, was the second youngest of 7 children, and 15 years old at the time their house was hit by a bomb. Her family lived on Humberstone Road in Leicester, a city in the middle of England. The bomb did not make a direct hit, and they were in the basement, so nobody in the family was killed. But many other people were killed by the bombs that night and the next.

The main Leicester blitz was two nights, the 19 and 20th of November, 1940. This was a major offensive against this particular city. The rest of the war, bombing of Leicester was more scattered.

The night of November 19, the family was sitting around the table having supper, and her brother Ray had just returned from a day of work at a munitions factory. He was a bit late and started supper just as the rest were finishing up. Her older sister Kitty, who lived a few streets away, arrived, asking why they were not in the basement, as there was real air raid going on. They were not paying much attention as there had been a lot of false alarms so far during the war. Everybody quickly moved downstairs to the basement, and not long after, a series of three bombs struck the neighbourhood in a straight line pattern, one after the other. One of these bombs destroyed a factory behind their house, and sent brick rubble crashing into the room where they had been sitting just before they ran to the basement. 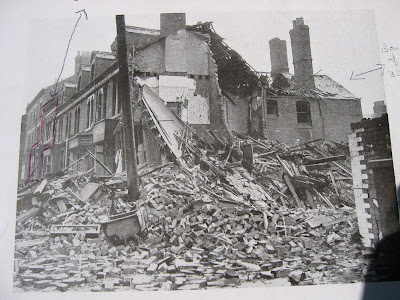 The next day, they discovered that the house was shaken badly enough to put all the windows and doors out of alignment, and to knock off the roof over the back bedrooms upstairs. The family would have to move, at least until the house could be repaired. The family had a guest staying with them. She was a friend named Mrs. Rodwell from Frisby on the Wreake. The morning after the house was bombed, Joyce was delegated to take Mrs. Rodwell to her son who lived just outside  Leicester. It should have been a 30 minute walk and bus ride, but they kept coming across streets that were closed due to unexploded bombs, so they ended up taking over two hours. Mrs. Rodwell was elderly and it was about all she could do to get there.
No one was home when Joyce returned four hours later, and she then had to start off to find her older brother Jack's house amid all the rubble and people running around. This also took a few hours because of more closed streets.

Although several factories were largely destroyed, the biggest damage caused by an explosion (as opposed to fire), was a parachuted land mine that hit the building of Messrs. Steels and Busks Ltd. On St. Saviour's Road, the next night (the 20th). The factory made ladies corsets, which seems to not be mentioned in any of the historical records I saw. However I guess if you know the word busk means a part of a corset, then it's obvious.

In the days that followed, everyone found a temporary place to stay. Joyce, who was working at the time, was offered a room to share by a co-worker. The various other sisters and brothers moved off to live with relatives, while Veronica, the youngest, stayed with her parents. My grandparents owned a cottage with a garden plot just at the edge of the city where they grew vegetables. They would use the cottage as a make-do shelter until they could find a better house. It had a sink, an outhouse, and a wood stove.

Everyone went back to work, but Kitty didn't like what she saw. Near her office was the burned skeleton of a night watchman still at his post. I personally find some of these stories kind of shocking, possibly stretching belief at times, but hey, it was a war and people really did die. Stranger things have happened.

It took a few months for my grandparents to find another place to live, during which time their damaged house was looted of rugs and curtains, and the water pipes burst.

By January, the family finally was able to find a new home in the village of Kilby, it was the 300 year old pub called the "Dog and Gun". My Grandfather and Grandmother took jobs as innkeepers, so that they could live there. The day they moved in, Joyce showed up at the pub, looking forward to seeing all her family again, but met her mother in the middle of unpacking, who impatiently asked her if she couldn't have stayed a few more days in the city while she got the house/pub ready to live in. My mother said she was somewhat put off by the welcome, but it was understandable. The first night at the Dog and Gun, it snowed, and water leaked on to the bed she was sharing with Veronica. Her sisters Veronica and Olive hated living at the Dog and Gun, but Joyce did not mind, although it was a seven mile bicycle ride to Leicester, and uphill all the way back. Her father did not have enough petrol ration coupons to drive to the city, so he sold the family car and bought a pony and trap in order to bring supplies to the pub.

It took two years to finally get their old house repaired and moved back to Humberstone Road in Leicester, but the repairs were not good enough and finally the house was pulled down entirely.

Near the end of the war, my mother married a French Canadian soldier, and moved to Canada. Her father died a few years later. She is now the only living member of her family, and is 85 years old.

According to this website, surprisingly, the corset makers Steels and Busks are still in business in Leicester. The last time I was in Leicester, in 1989, I visited the "Ladies Underwear Museum", which I suppose I don't need to add was very interesting.

Picture 1: Back in 1939 when this picture was taken, both my uncles rode Rudge Ulster motorcycles, made in Coventry. The motorcycle on the right has my uncle Ray and my mother at 14 years old. This was just before the war started, and a year before they were bombed out. Alf, on the other motorcycle died of a brain tumor less than a year later, before the bombing. The picture is taken behind their house on Humberstone Road.

Picture 2: Taken from a book "Leicester Blitz Souvenir", shows Humberstone Road on Nov. 20th with the family's house outlined in a red pen. Click on the picture to zoom in.

Some first hand accounts of the Leicester Blitz: