A Motorcycle Sound is Not Just Noise 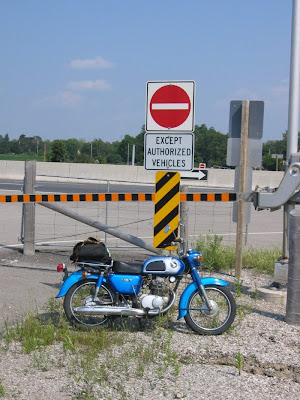 When you listen to the sound of a motorcycle engine at highway speeds, does it say anything to you? Sure, there is the actual noise of the exhaust, and possibly some whine and clatter from the moving parts. But to me there is always something more. I am listening for the sound of impending doom, like Captain Kirk in Start Trek listening to the Chief Engineer Scotty in the engine room "She canna take it captain, she's breakin' up".

There have been a number of different sounds in my own motorcycling history. Most of the time I did not hear any negative protests from the engine compartment. On my first bike, the Honda CD175, I often cruised at 60-70 mph, blissfully unaware of any panic down below. It helped that there was no tachometer, it was months before I read through a shop manual and calculated, to my surprise, that the engine was running at a steady 7,000 -8,000 rpm. Also, the mufflers were very quiet, and the wind was very loud. So I never heard any noise from the engine. And then, being 21 years old, I didn't know that much about what could go wrong with an engine anyway. If I had known about all the moving parts inside there, I might have slowed down.

My next bike was a two stroke, and the exhaust sound is quite distinctive from a typical modern motorcycle engine. While accelerating, the two stroke exhaust is sharp, and on deceleration, it has a distinctly erratic high pitched popping noise. But if the engine is not running right, for example the plugs are getting fouled, you can hear a difference in the exhaust note. That may be because the exhaust comes directly from the power stroke, or it may be because a fouled plug clogs up the muffler with oil. But you can hear the difference between a good or bad running engine much easier on a two stroke than a four stroke.

My next bike was a Honda GL500, and like all my bikes after that, it was a four stroke. But surprisingly, for a V-twin, it had a very flat and droning exhaust note. Although it was very subdued, I kind of expected a more melodious "bike bike" sound when I bought it. I did ride that bike pretty hard, as it was the first bike where I did not worry about keeping up with freeway traffic. It was twice the size of my previous bike, and plus it was liquid cooled, like a car. My first bike never saw a freeway, and the second stayed in the slow lane for fear of seizing the motor. The GL500 felt secure to me. But as it got older, I started hearing funny noises coming from the engine, and then I began to lose a little confidence in it.

Then I got a bike that put all worries aside, tossed them in the dungeon and threw away the key. If Scotty had been down there, he would have been whining "Can't you find a place to go to warp speed, captain? The thrusters are getting rusty from lack of use." This bike had six cylinders and 1000 cc. Each one of the six cylinders was the size of the entire engine on my first bike. It also had a fairly loud racing exhaust. On the freeway, if I gave it full throttle, the sound was enough to make surrounding motorists duck as though they had been buzzed by a low flying F-16. Heck, even I ducked a few times until I realized that it was me.

After that I got a four cylinder BMW, liquid cooled and with a standard muffler. For some reason that bike always sounded more like a transport truck than a Formula 1 racing car. But no matter. Either way the undertone of the engine sound was always a positive message "Hey, open it up, us cylinders need some exercise". And of course, I got a few speeding tickets to prove it.

Now I have this 900 cc V-twin Kawasaki Vulcan. For the first time, I have a bike that delivers a traditional motorcycle sound. The sound you hear in movies like "Easy Rider", and "The Wild Angels". The sound I used to hear rumbling past the house at night when I was a kid. But when I get the Vulcan out on the freeway for a long drone, I hear another undertone to the sound again. As I get up to 125 kph, the engine begins to vibrate a little, despite the rubber mounting and the counterbalancer, and I start to hear a faint "She canna take it captain."

It's all BS of course, because I'm sure there is no problem travelling at much higher speeds. But unlike many of my other bikes, the Vulcan is designed to feel better at lower speeds. It vibrates less, sounds more mellow, and even seems to produce more power. My other bikes seem fussy at low speeds, and smoothed out at ridiculous speeds, and the power seemed to build the faster I drove them.

So yesterday, for old time's sake I drove my restored 1970 CD175 down to Port Dover, 100 km away. On the way down, something was holding me back. Even on the busier roads I was afraid to go over 80 kph (which is the speed limit anyway, but try telling that to a line of cars forming to the rear). But on the way home, the voices in the engine fell silent, and all I heard was this smooth purring at 110 kph, and sometimes I went even faster. Yes, I still had some cars behind. It was Friday, and lots of people have places they are desperate to get to. But it was kind of fun flying along at those speeds on such a tiny bike.

Now maybe I should start listening to the sounds from the skinny 3 inch wide tires of unknown origin. "She really canna take it Captain." True, they are the same size tires from forty years ago, but I have also added about forty pounds to the payload.

Picture: My Honda CD175 on the way back from Port Dover, almost tempted to get on the freeway, but no.
Copyright the Lost Motorcyclist