T-Shirts That Annoy Me 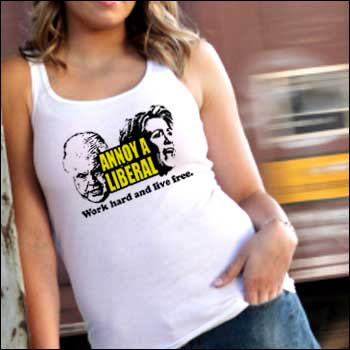 I have not been to the USA since they tightened border security to require passports. So I don't know if people actually wear t-shirts like this. But apparently somebody thinks they want to and is willing to make a buck off it.

Also on this web page: "If you ask me to press 1 for English I hang up!" With slogans like this you really should have the English language spell checker on before you upload your page. For example: "Ah, it's so much fun being right, isn't it? A histerical t-shirt for conservative right wingers. Only found here at conservative-t-shirts.com"

Apparently some conservatives think it annoys Liberals to work hard and live free. I don't get it, except as a not so subtle propaganda statement that liberals always live off welfare, while conservatives always seem to get the hard-working jobs. If you're hard at work stamping out dumb t-shirts all day long, well, just go ahead and knock yourself out. Why should I even care? And why should you care how hard I work at my job, unless you're my boss.

But if you're a CEO raking in 30 million a year in a defence or oil industry, wearing that t-shirt, yes, that kind of annoys me. Start by paying your fair share of taxes! How can people take that much money, while the government sinks into debt paying for wars that in turn make profits for defence industries and oil corporations.

Now how do you annoy a Conservative? Be born anything but white or Christian. Pay your fair share of taxes. 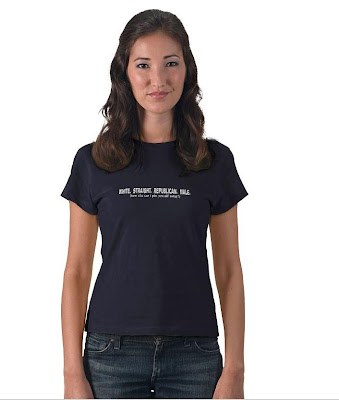 Here's another shirt: "White, straight, Republican, male (How else can I piss you off today)

Obviously, by also being an Evangelical Fundamentalist. Actually the most annoying part of this is that it is apparently a Canadian website. We can't even vote for the Republican party in Canada. And furthermore she is apparently a straight white male? Yes, that actually is beginning to piss me off. I thought she/he was female.

Wait a minute, is he/she even white? Is this Canadian organization cranking out the conservative t-shirts with a shop full of illegal migrant workers where nobody even speaks English? By the way, it might be photoshopped, but if so I didn't do it.
Copyright the Lost Motorcyclist