Coolest Bikes and their Riders 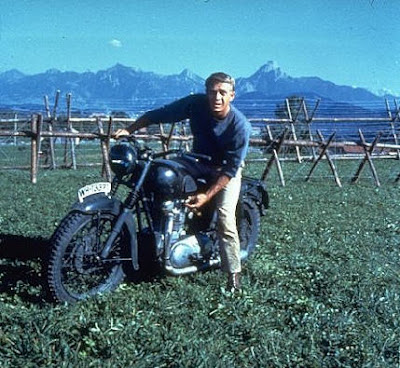 This is a survey of the top coolest motorcycles and their riders. I have decided that for a motorcycle to be cool, it needs a human with it. It's only once you know the rider that the bike can be properly judged.

Steve McQueen and Triumph or Indian. After you mention Steve McQueen in a motorcycle cool-off is there any point of listing the other contenders? Steve McQueen had an extensive collection of bikes, he competed in the International Six Days Trials. He was the guy who jumped the barbed wire in "The Great Escape" (actually a stunt man did it). He was a star of the famous motorcycle documentary "On Any Sunday". And he is often called the king of cool. My only objection really, is his character in "The Great Escape" who was irritatingly American (rather than cool). This character was a fictitious character, made up to appeal to American audiences, where in the original real great escape, American involvement was very restricted.


Lawrence of Arabia and the Brough Superior. Lawrence was a real historical character, not a pampered actor, so he gets a lot of bonus points for that. His bike was also very cool, and Lawrence stuck with the same make of bike which to my mind enhances the image. He also actually dies in a motorcycle accident, instead of lung cancer like Steve, so I'll also award him 8/10

Fonzie and his custom bike. Fonzie was the first leather jacketed biker to be featured in a regular prime time TV program, and helped break the mold of the evil biker of the fifties and sixties. On screen, he rode a customized bike, seemed kind of home made. But because the Fonz could not ride a bike in real life, and because he was only an actor, and his real life in no way matched his on screen antics, I will only give him a 6/10

Marlon Brando and Triumph. Unfortunately this film "The Wild Ones" did more to tarnish the name of bikers than to enhance it, so 5/10

Jay Leno on any one of his motorcycles. Jay is a comedian with a huge bike and car collection. I like his website, where he produces videos of him discussing and riding his bikes. He rides a bike in real life and talks to random motorcyclists he meets around southern California. Seems to be a likeable guy: 7/10


Peter Fonda on the Captain America chopper. Peter Fonda made a big impression with the movie "Easy Rider" in 1969. He rode a custom Chopper across America. Peter also starred in other biker movies. I also remember him doing a cameo in "Wild Hogs", a recent biker comedy film. Although Peter is in the biker hall of fame, I just don't think of him as being much of a motorcyclist himself, more of an actor who used motorcycles in film. 6/10

Burt Munro with 1920 Indian Scout A movie "World's Fastest Indian" was made about him. What I like is the persistence of the guy in rebuilding his Indian Scout by hand over many years to make it the fastest in the world. 7/10
http://www.indianmotorbikes.com/features/munro/munro.htm