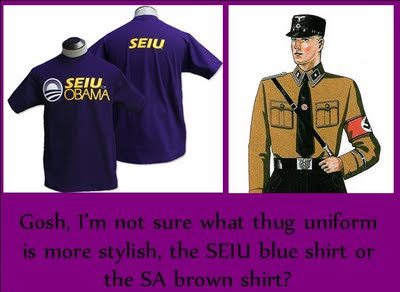 This is from an interview with Jonah Goldberg. Jonah, an American conservative writer, seems to specialize in outrageous cutting edge rhetoric. I cannot imagine that his work is considered serious, for example his plea for the US to begin bombing Canada to get us to join the coalition in Iraq. However some conservatives like to characterize him as a more serious thinker than say Rush Limbaugh, and I might just agree with that.

Jonah Goldberg wrote a book called "Liberal Fascism", where he tries to deflect criticism that the conservatives are like Nazis, by claiming that on the contrary, it is the liberals who are actually like the Nazis.

Question in an interview by Calitreview:

"You state that “Woodrow Wilson was the twentieth century’s first fascist dictator.” Would you talk a little about that and the assault on civil liberties that occurred in this country during World War I."

Jonah: "The late sociologist Robert Nisbet once wrote, that the “West’s first real experience with totalitarianism – political absolutism extended into every possible area of culture and society, education, religion, industry, the arts, local community and family included, with a kind of terror always waiting in the wings – came with the American war state under Wilson.” Nisbet was right. Under Wilson, American newspapers and magazines were censored, threatened, harassed and intimidated. The Committee on Public Information, the first modern propaganda ministry, sent propaganda agents across the country – “four minute men” to whip-up war fever. The CPI released a string of propaganda films with such titles as The Kaiser, The Beast of Berlin, and The Prussian Cur. The Justice Department established the American Protective League, literally an army of goons a quarter-million strong at their zenith, who beat up “slackers” and other dissidents, spied on people and performed unconstitutional background checks. In 1920 a salesman at a clothing store in Waterbury, Connecticut, received a six-month prison sentence for referring to Lenin as “one of the brainiest” leaders in the world. Mrs. Rose Pastor Stokes was arrested, tried, and convicted for telling a women’s group, “I am for the people, and the government is for the profiteers.” These are just a few examples of what I’m talking about."

So to go through Jonah's answer here, he states that the west's first experience with totalitarianism was under Woodrow Wilson in WW1. I am not familiar with his source, Robert Nisbet, but according to Wikipedia, Nisbet is a conservative, and so may be biased on this topic. And I'm not sure what exactly is included by the "West". Because I am quite sure that the UK had a ministry in charge of propaganda, and had censorship of newspapers and magazines before the U.S. did. Britain was in WW1 for three years before the United States entered, (a little known fact in the U.S. apparently) and the Brits were familiar with censorship already from the Boer war.

Next, is the reference to the "American Protective League". According to Wikipedia, the "American Protective League was an American organization of private citizens that worked with federal law enforcement agencies during the World War I era to identify suspected German sympathizers and to counteract the activities of radicals, anarchists, anti-war activists, and left-wing labor and political organizations."

So an army of goons was hired by rich conservatives to beat up liberal anti-war activists, left-wing labour and left wing political organizations. Hey, Jonah, you are still just as crazy as when you had the idea of bombing Canada for the purpose of making Canadians friendly to the USA. Right wing mobs beating up leftists does not prove the leftists are fascists, it proves the opposite.

To be fair to Jonah, his reasoning is based on the Woodrow Wilson describing himself as a progressive, and this APL thuggery happened under his watch. But then, Woodrow Wilson also described himself as the man who kept America out of the war. As we all know, Woodrow Wilson was the president who actually ended up declaring war on Germany. In times of war, people do things that may go against their better instinct. Even so, Wilson was quite concerned about the APL militia, and wanted to limit their power, but I guess was afraid to do so because he may have been beaten up himself. That's how things go in war.

"And Goldberg doesn't merely make the case that the label is unfair. His turning of the tables is more thorough and, to the conservatives who perceive themselves as unfairly labeled, more gratifying than that. His argument is that, actually, fascism is not a right-wing or conservative idea at all. It's always been a leftist notion, and even today, a lot of liberal beliefs have, unbeknownst to liberals themselves, fascist origins."

So apparently even the New York Times does not pick up on the irony that a private army of thugs beating up on left wingers, proves that the left wing is Fascist. Part of this review even refers to Goldberg as "a serious and thoughtful writer of opinion pieces for the Los Angeles Times and National Review Online".

If anything, Jonah's failure to prove his point kind of proves the opposite, that Conservatives will lie copiously to conceal their similarity to fascists, especially in the conservatives tendencies to militaristic nationalism, eagerness to go to war, and lack of tolerance. A private army of thugs operating outside of the government payroll fits in quite well with conservative notions of "privatization" and "shrinking the government".


Here is a link to my blog where I disagree with Jonah's equally poor plan to bomb Canada.

And another where I give a closer look at the Orwellian idea of doublethink:

Picture: From this conservative site you can see Jonah is not the only conservative who would like to link the Nazis to the liberals http://mangod-mangod.blogspot.com/2009/10/obamas-seiu-thugs-attack-black.html
Copyright the Lost Motorcyclist