How to Profit from the Coming Medieval Ages 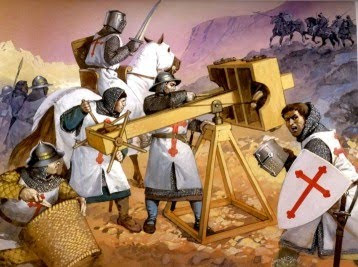 There is no better way to riches than being able to predict the future. If you can't predict the future precisely, at least try to spot trends developing. I would like to share with you, a trend I have spotted and show how it can be exploited to your financial advantage.

We may be less than two years away from Sarah Palin becoming an American president who believes in holy wars, torture, devils, and witchcraft. And she will not be a big fan of scientific research in areas such as evolution, abortion, stem cells, DNA, the environment and global warming.

If Sarah Palin's presidency turns out to be the forward tip of a trend, I think it would be good advice to start looking now for similar periods in history, and do not skim lightly over the chapters on the medieval age and the crusades.

As I was growing up, I must admit I was influenced by a lot of anti-medieval attitudes that were promoted in history books. Stories of horrendous tortures, witch burnings, senseless holy wars, slavery, serfdom, and tyranny, all in a setting of filth and plagues. I was not a big fan of the medieval times.

Some polling uptrends in the last few years include hatred of science, belief in devils and ghosts, faith healing, disdain for education, love of torture. All on the increase. Interest in voting, on the other hand is on the wane. These are all ideas that polled similarly in Medieval times. Although we may never go back to the same pestilence ridden dark ages of Europe, there are still some significant opportunities to learn from the past while gaining insights into what the future might bring.

When I was researching the medieval times, I was surprised by just how many upbeat websites there were, with career guidance suggestions especially. Looks like I'm not the only one interested in preparing myself for the eventuality.

The justice system, economy, and government in medieval times were fear-based. In law, tortures were allowed for both confessions and punishments, for the guilty and the innocent alike. The economy was based on slavery and forced labour, with fearsome torture awaiting those who grumbled about their servitude. The government had castles set aside specializing in the torture of rebels, dissidents, and infidels. If this gives you any ideas for good career opportunities, you are not alone, and the topic of "Jobs in the Torture Industry" will be picked up later.

In order to better enjoy what's left of my my retirement, it would probably be advisable to cash in all my investments, close all my accounts, and buy gold coins and ingots. Check out all the ads on Fox News for gold if you don't think this is the way of the future. Then look at the current price of gold. Medieval people were not big on "paper money" they like something with value to exchange for goods and services. If you are interested in investing money other than in gold, you could get some tips from this "End Times Portfolio" blog.

Skills are always with you, and it would be good to take some practical courses that could serve in the coming religious age. These jobs could be hiring in less than ten years: Blacksmiths, Blood letters, rat catchers, hangmen, torturers, religious pastors, squires, soldiers, court jesters, and cathedral stone masons. A particularly good job, if you can get it, is Grand Inquisitor. A job you may want to avoid is the coyly named "gong farmer" who cleans out latrines, after sorting through the excrement for dropped buttons and coins. (Why buttons? Remember, no zippers) Since the Gong Farmer has been nominated for worst job in all history, I suggest making an extra special effort to find a different line of work if you wish to fully enjoy your return to the medieval times.

And you might want to tear up and burn any science diplomas, books, and any educational awards in relation to astronomy, geology, and genetics. Especially so if they have anything to do with works by Darwin, or Galileo. You will be more likely to burn at the stake than to get a paying job in these areas.

For a comprehensive list of medieval jobs, consult these web pages.
http://www.medieval-life-and-times.info/medieval-england/medieval-jobs.htm
http://medieval.stormthecastle.com/medieval-jobs.htm
Or buy the book on this page.
http://site.annickpress.com/catalog/catalog.aspx?Title=Archers,+Alchemists+and+98+Other+Medieval+Jobs+You+Might+Have+Loved+or+Loathed

The jobs to avoid the most are on this page
http://forums.canadiancontent.net/history/51434-medieval-worst-jobs.html

A particularly lucrative industry for people who desire good income with stable employment, will be springing up around the design and manufacturer of instruments of torture. A surprisingly wide variety of instruments are require in medieval cultures, and all are hand crafted. Some experience blacksmithing would be an asset. Just a sample of the instruments required: Branding Irons, Iron Maidens, Racks, Thumbscrews, Foot presses, Foot screws, Heretic's forks, and many others. This is a growth industry with real potential.
http://www.medieval-life-and-times.info/medieval-torture-and-punishment/instruments-of-torture.htm

If you are of the male persuasion, you are probably OK, but I might suggest any females get a sex change operation while they can. Women in the dark ages were considered chattel, like goats, and had a harder life than men, with fewer opportunities for advancement. Many more women than men burned as a witch or starved in poverty (hint women were not allowed to own property, so if your husband died, you were done for).

Picture: Christians fighting Muslims in the Middle East during the crusades, when it was not politically incorrect to wear the cross of Jesus prominently displayed.
Copyright the Lost Motorcyclist