Soviet vs. Capitalist Propaganda Still With Us 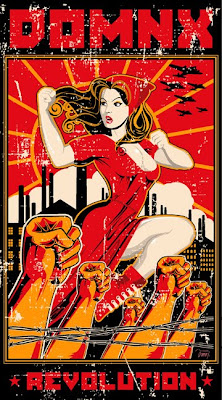 I received this story as one of the endless forwarded emails from right wing sources. I don't want to analyse every one of them in my blog, as there are simply too many. But this was the first one forwarded to me by Mary Ann, as she normally hits the delete key first. This one seemed to bother her because of who sent it, and because it was about teaching. So I decided to use it as an example lesson in media literacy. (i.e. bullsh*t awareness 101)

An economics professor at a local college made a statement that he had never failed a single student before, but had once failed an entire class.

The professor then said, “OK, we will have an experiment in this class on Obama’s plan”.

The second test average was a D! No one was happy.

When the 3rd test rolled around, the average was an F.

The scores never increased as bickering, blame and name-calling all resulted in hard feelings and no one would study for the benefit of anyone else.

All failed, to their great surprise, and the professor told them that socialism would also ultimately fail because when the reward is great, the effort to succeed is great but when government takes all the reward away, no one will try or want to succeed. Could not be any simpler than that.

This would actually be an interesting experiment, from a scientific point of view, just to see what the outcome would be in real life (instead of the imaginations of email spammers). I'll bet some people would be surprised to find out that many, maybe thousands of real scientific experiments have been done about what motivates people. Motivating people is the basis for many human endeavours, including sales, political propaganda, education (as illustrated), and just about any business that has hired people to work for them. It would be mind boggling if no one had ever studied human motivation before.

What have we learned from real scientific studies of human motivation? Some students will work for high marks in school, and many students do not. In the workplace, many people will work for money, but other motivating factors have been discovered. And it has also been determined that once the workers have enough money to cover their basic needs, that money loses some of its motivational power.

I find it easy to imagine a Soviet style story just like this one, except "proving" that capitalism does not work.

It starts off like this "My comrades, once upon a time there was a professor at a local college..blah blah.. all his students thought capitalism was a great system ... blah blah ... all the students who get low marks have to give their lunches to the kids who have high marks." and finally. it ends like this "The students who got low marks threatened the students with high marks, so that they would not do so well in their tests next time." And to summarize. "Finally, everybody failed, therefore capitalism does not work. Glory to Stalin and the Communist Revolution!"

By the way: No socialist has ever proposed removing all rewards from their economic system. On the other hand, capitalist generally agree that starvation, torture, and poverty is not a requirement for the capitalist system to work. And, oh yeah... Obama is not a socialist anyway. Extremist black/white viewpoints like the stories above are useful only in brainwashing the masses.