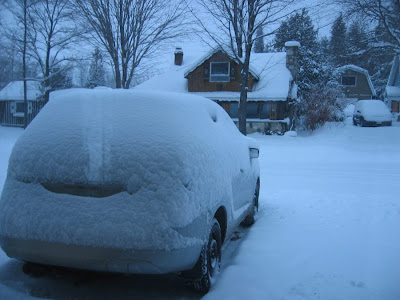 What I call low tech is winter driving without a cell phone, without anti-lock braking, without anti-skid computer systems, no cruise control, no automatic transmission, no GPS, or Blackberry, and no all-wheel drive. To some people this is madness. Especially when I tell them about driving to Labrador in February. But it was not that surprising, as the road to Labrador has no cell phone towers anyway.

But despite my lack of cutting edge technology in certain areas, I will make use of some other new developments in the world of winter driving. I will use the Internet or the weather channel on TV for radar images of weather, and for road and weather reports before setting out on a trip. I do have winter tires, and beam type windshield wipers, two new products for winter driving that have gained a lot of popularity in the last ten years or so. I currently have synthetic oil in the engine, which works well at low and high temperatures. My car is fuel injected, meaning it generally starts quickly in cold weather, and with no choke twisting. If you still call front wheel drive high tech, I have that too.

My first car was a 1956 model, which did not have a windshield washer system. While the washers are a benefit in the summer, they are essential equipment for winter driving. And just as some technology advances are now taken for granted, some regression has occurred too. Remember when cars all had a full sized spare? In another trend, recently, car tires have gotten a lot wider. Although this may have some benefits on dry roads, when dealing with snow and slush the old style narrow tires work better.

If you read the weather maps correctly, you will not be out of the house in bad weather, and so you may not need the following advice. But it happens, so...

If you are out in the snow already, you should observe the road and weather conditions outside your car windows. I have a thermometer on the car's instrument panel that gives me the temperature outside. At 0 or -2 degrees C on damp evenings after the sun goes down, beware of bridges. They often form black ice first. And slow down when visibility is obscured, or when the road condition is snow or ice covered. If I can, I get off the freeway when I think conditions may deteriorate quickly, because that is when the deadly 50-car pile ups generally occur. But I only do that when I know the local roads fairly well.

The worst problem in the winter is crashing due to loss of control in icy or low traction conditions. Here, ABS can help, and so can anti-skid systems. But better than either of those, would be equipping a car with winter tires. Although ABS and anti-skid may keep you from spinning, they do not help you stop faster, or help you stay in your lane in a curve, the way winter tires can. If you drive a low-tech car without ABS, you should at least learn to pump the brakes, which helps you maintain control while still slowing down as best you can.

Don't forget that sometimes, it's not you hitting something else, it's another car hitting you. You have very little control over that once you make the decision to sally forth into the winter wonderland.

A front wheel drive car without an anti-skid system is vulnerable to spinning around (also known as losing the back end) in slippery corners. You need to learn to point the front wheels to counteract the spin, and if you have front wheel drive, to accelerate instead of backing off the throttle. Another option instead of accelerating would be to press the clutch pedal. You will only make it worse with a front wheel drive car, when you take your foot off the gas. This will have the effect of slowing down the front end of the car while the back end continues past you at speed, starting a skid where you can end up backwards on the road, or in the ditch, or worse.

The second worst situation in the winter, after crashing, is being stuck far from help. It's to prevent this possibility that lot of people buy four wheel drive vehicles. I think that some people put a bit too much faith in their four wheel drive technology, with the result being, that they are still as likely to get stuck, only much farther from any help. Instead of four wheel drive, I put my faith in a snow shovel in the back of the car. But I know how limited that is, even with Mary Ann out there pushing the car after she clears all the snow from in front of and behind the tires.

One way to get stuck is not just because you can't move yourself, but because the traffic around you is all stuck. In cases like that even snowplows can't move. Another way to get stuck is to pull off to the side of the road and accidentally drop into the ditch, which is hidden because the plow pushed the snowbank back too far. Of course other situations should be preventable, like running out of gas. Always try to keep the tank more than half full in winter. And it would be a good idea to have a working gas gauge.

With an old, unreliable car, there are hundreds of ways to get stranded. (e.g. run out of gas when the gas gauge does not work) I'm sure all are amusing and I have many stories myself which I will not bore you with here. At this time, I am driving a 2005 Toyota Matrix, which has so far been utterly reliable, and that is mostly why I bought it. Reliability is a feature that does nothing for the sexiness of a car, but it has a lot of appeal in winter driving. If you have ever been forced to step out of a warm car in a blizzard you will know what I mean. I don't mind paying extra for a car that I know will just keep working no matter how cold it gets out there.

When driving in Canada in January, never fool yourself into thinking you can dress for the summer, just because you are in a car. Dress for the winter if it's winter. Turn down the heater in the car a bit, or remove your toque and gloves in the car to stay comfortable. But make sure you have the boots and whatever other clothing you need to get outside and keep on living.

Every winter there are new drivers out there, who for whatever reason have never driven in snow before, and think they have a "better way". Especially when it comes to eliminating such burdensome tasks as brushing the snow off the car before starting out. I spotted one such genius, who was driving through a mall parking lot, with a huge pile of snow on his car, and all the windows obscured as he had decided let the snow fly off in the air all by itself while driving. As he drove through the lot toward the busy road, lots of snow was flying off the car, leaving a dust cloud and whiteout conditions behind him. The driver decided that he needed go faster, as the snow was not coming off fast enough and he still could not see where he was going. So he accelerated toward the intersection, with even greater clouds of snow coming off, and the deep pile of snow on the hood and roof gradually wearing down. The plan was working, in a way, but still no luck seeing out the windows. At quite a high speed, the car crossed the raised sidewalk, flew past the stop sign, and came down hard in the middle of the busy the street. I don't have to imagine what this display looked like to the oncoming car drivers, as I was the driver that came closest to hitting the snow comet. As it went over the bump,the remaining snow exploded off the car into the air, and the driver could finally see where he was. Nobody hit him, and that's an indication of how many Canadians drive defensively in winter. And why.

Picture: Our Toyota Matrix outside the Lion's Head Beach Motel on a winter trip in 2008. Here's my 30 second "How to drive in snow" video, of Mary Ann driving out after a plow went by and blocked the car in.
http://www.youtube.com/watch?v=gOOmiywKN7U
Copyright the Lost Motorcyclist