The Last Motorcycle on Earth 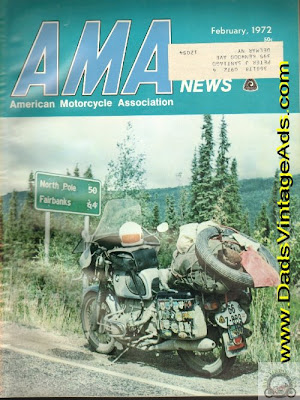 The Toronto Motorcycle Show is coming up on December 10, 2010. I am going there to look at all the new bikes. I want to see the new six cylinder BMW K1600GT, and the new Honda CBR250R sport bike. And I know there are going to be maybe a hundred other bikes available. What a contrast to when I bought my first bike in 1969, in Sierra Leone West Africa, where there were only two bike models to choose from in the entire country. A Honda 90 step-thru, and a Honda CD175 twin.

Here is my question. I know a lot of people speculate on what new and more wonderful bikes they would like to see. I myself was speculating on the introduction of the new BMW six cylinder touring bike. But let's turn that around, and speculate on what we would like to have as the last bike left on Earth. OK OK, maybe that's a bit too drastic. So let's narrow it down a bit first. How about if from now on, there was only model of bike for sale in the USA or Canada. What if I arrive at the Toronto bike show and find out that due to some end-of-the-world fictional scenario, there was one and only one bike model on display, available for sale? I know the very suggestion that everyone has to ride the same bike is a nightmare to motorcyclists, but come on, it's just a hypothetical question.

The ground rules, it would have to be a currently available model sold at the current price (no jacking up the price because of no competition!) And it would have to be accessible to the greatest number of motorcyclists. What that means is that even if you don't care for its style or capabilities, most people should at least be able to buy it and ride it, and put it to whatever use they would normally have for a bike.

A 100cc scooter could not go on long trips using the freeways. An adventure bike may be too tall for some riders. A Harley-Davidson may be too expensive. Once I eliminated most of the extreme bikes, I might pick the Kawasaki Vulcan VN900 Classic LT. (Disclosure: Yes I own one of these) And while there is nothing outstanding about this bike, you could argue that if only one bike was available for sale, this could be it. Anyone from a beginner to an expert can ride this bike and have fun doing it. It can fit riders big and small. It is affordable by the rich and the poor.

Admittedly, the Vulcan is not an offroad bike, and maybe we need something different for people who actually do need to go offroad. But for 99% of those who buy a huge dual-sport bike, and hardly ever go on a gravel road, the Vulcan will do just fine.

Why would I pick out this bike from the dozens of other models? The Kawasaki Vulcan 900 is a true "easy rider" that does not demand much from the rider. There is no high speed tingling vibration, and no low speed pounding vibration, just the reassuring feel that a motor is running down there somewhere. When you let out the clutch, the bike moves forward without bogging down, which is much appreciated. That's what some people call a torquey engine. Maybe no one will ever have a problem stalling this bike at the stop lights. The gearbox is also easy to use. No big lurches, no horrible crunching and grinding. Smooth and relaxed getting from one gear to another.

Although there is no centre stand and no tachometer, it does have the heel and toe shifter, floorboards, and the touring package of windshield, saddlebags, and sissy bar. The belt drive is light, cheap, and clean, and you don't have to fiddle with it. There should be no controversy about the classical bike looks, including round chrome headlight, full fenders, covered fork tubes, and laced wheels.

Most of the other characteristics of the bike should suit all but the most incurable complainers, including fuel injection, water cooling, weather protection, luggage, good headlight, just enough power for acceleration, passenger capability and disk brakes.

Fast riders will need to slow down just a little, the low floor boards scrape in harder corners. But maybe that's a good thing. This bike is still as fast as most cars in the curves, except in the most extreme mountain areas.

The Kawasaki Vulcan 900 is made in Japan, which to me is an indication of quality. I have the impression that Japanese people consider it a dishonour to sell shoddy merchandise. Maybe they are overcompensating for the bad old days, or whatever. It doesn't matter why, but the result is that I did not have to take this bike (or any of my other Japanese bikes) back to the shop for warranty repairs.

So, with the moderately priced, easy to ride, and functional Vulcan 900 available in North America, would we really need any other bike? To be honest, I don't really want to ride the same bike as everyone else. So I might customize mine to make it more unique. For looks alone, I would go for a narrower handlebar, which would also help me get it out of my narrow crowded garage. And for safety on the busy roads around here, I might add a high mounted extra scrolling LED brake light, which would display the words "Give me a brake". I'm sure other people would customise all their bike so much that in the end, they would all look different anyway.

There are two other bikes that are pretty similar. The Suzuki Boulevard C50, and the Yamaha V-Star 950 Tourer are the ones I know about. So that class of bike must be popular. You could probably argue any one of the three as being the best "only" bike for Canada.

Picture: I suppose this could be the last bike on Earth too. It's a picture of a BMW from 1972, I guess driven by a German, touring Alaska. You can see by the sign that North Pole is a bit closer than Fairbanks, and apparently has less people mad at it, judging by the bullet holes. (The "Bullet hole poll" is a popular way people in the north express their opinions, especially at speed limits.) There are 4 places in the United States named "North Pole". They are located in Alaska, Idaho, New York and Oklahoma. I know of only one in Canada. It is actually at the North Pole, and Santa lives there.