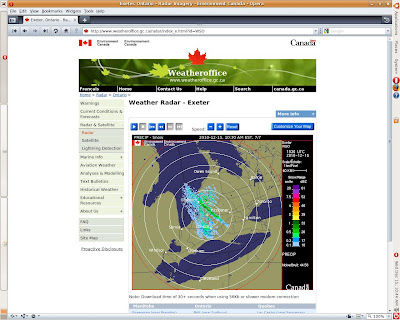 Canadians may have an inferiority complex, according to Wikileaks, but not when it comes to snow. We are pretty confident that we have more of that stuff than anybody else, and we think we know how to handle ourselves in it.

That myth was debunked yesterday, when 300 motorists were trapped overnight on the 402 near Sarnia. Apparently we are just like anyone else, if we get three times as much snow, falling twice as fast as normal, being drifted by 60 kph winds, lasting three days, in freezing temperatures, we get stuck too. At one point on Tuesday morning, the military rescue helicopters were grounded, the snowplows were stuck, the Police 4 wheel drive vehicles couldn't get through. Only the snowmobiles could get around, but could not travel far enough carrying a big enough load to rescue many people.

So what did the Canadians do then? They went to Tim Horton's apparently. And to farmers' houses, and various buildings, or shared the heat in the cabs of big trucks. So nobody died, according to the latest reports, but I'm not sure how they know as there is no system to register who is on the road, and cars can literally disappear under the snow.

This system is not a blizzard, it is what we like to call "lake effect snow", a much smaller snow system. What made this one so bad was that it was severe and long lasting, and it did not move for days. If you happened to be in it's path, it must have seemed like the big guy had pointed His holy snowblower in your direction for a couple of days.

So I called my mother, who lives in Dutton, a little to the south east of Wyoming, Ontario (the hardest hit area). She reported that there was about a half meter of snow on the ground, and she understood the 401 was also closed. I checked the Internet, but it wasn't, except for two accidents.

Here are a couple of good websites to help plan trips. I use them to avoid rain when I'm riding my motorcycle, and to check road conditions in the winter.

Here is a road map compatible with my browser. Just tick off road conditions and closures to see where they are. You will see there are also three traffic cameras in London, if you tick traffic cameras.
http://www.mto.gov.on.ca/english/traveller/trip/map.shtml?ll=42.964211,-81.251792&z=11

I decided not to go down to visit Dutton, because the first and most important part of coping with snow is figuring out when to stay home. Then this morning I decided to replace my car battery instead of trying to push an old one for an extra year's life. And I got some winter windshield wipers.

In very bad winter conditions, slush builds up in the frame of conventional wiper blades, which then freezes while you are driving, and reduces visibility, so you can hardly see the white-out in front of you. (White-out is a word we use for when it is snowing so hard that all you see is white around you) 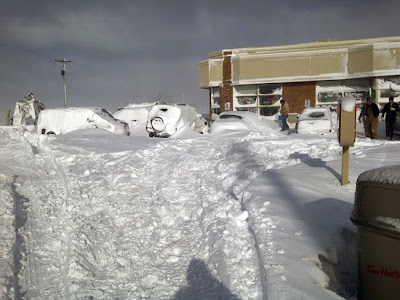 For the first time I bought a pair of beam-type windshield wipers. I have gotten tired of the old routine of having to stop the car in a snowstorm, pulling over to the side of the road (when you can't even see the edge of the road), jumping out of the car in the wind, cold and snow, and trying to crack the ice out of the windshield wiper frames, while dodging the slush spray from passing traffic. I am too old for that now. Probably always was. These new wiper blades have no intricate lattice frame to clog with ice, so we'll see how that works for me. They are very expensive, though, about $50 a pair. They claim to be "all-season" but I asked for my old regular wiper blades back. I'll probably save the beam blades for winter use only. I got the blades at Jiffy Lube, but here is a Canadian Tire buyer's guide to wiper blades.

Picture: The radar image of the "lake effect snow", still pumping away this morning.
Second Picture: Tim Hortons at Reece's Corners yesterday, where some stranded motorists hung out. From this CTV website
Copyright the Lost Motorcyclist