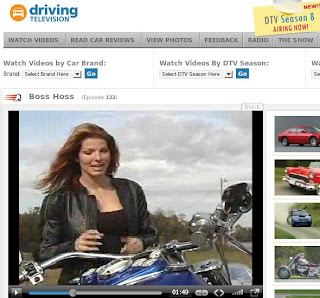 I have seen a few Boss Hoss motorcycles around, and in my opinion they are excessive. So now I have my opinion on record, I want to say something in general about the way we describe big motorcycles vs. small motorcycles, because it has a lot to do with how easily we are attracted to them. Statements of huge horsepower tend to be be backed up with fact, and we insist on it. But statements of nimble handling and ease of maneuvering are allowed to be hugely exaggerated, and we don't care.

In this video, from Driving Television season 1, Dagmar Midcap takes a Boss Hoss for a ride. Although she is rather small, she appears to have no difficulty handling the Boss Hoss.

My only problem is with the use of words and descriptions, that in this case give an unfair advantage to larger bikes. If we continue to insist that bikes live up to the horsepower claims, but we never insist they live up to ease of handling claims, bikes will tend to get bigger. These attitudes may even explain why we have so many excessively large motorcycles.

"She's smaller than the average motorcycle rider, and she handles the Boss Hoss with ease. And that's something we've been seeing more and more of."

Dagmar: "Acceleration is phenomenal, The small block 350 V-8 has 405 foot pounds of torque. And the larger 502 engine, well that has a pavement pounding 567 foot pounds of torque. The Boss Hoss is a lot easier to balance than you might think. It'll take you a few minutes to get used to the sheer bulk and mass of this vehicle, but after you toss it around in the corners, you'll notice that it's really well balanced. Throttle acceleration is obviously incredibly powerful, but it's smooth. At about the half way barrier, you'll notice that this engine changes dramatically. That's when the full force of the 385 horsepower kicks in. The secret is in the engineering. With the engine mounted in line with the frame and a right angle drive transmission, that allows the length of the bike to be kept to a minimum, the Boss Hoss is relatively easy to maneuver. And its low centre of gravity provides good balance. This monster needs to be treated with respect because it can bite you. As North America's ultimate cruiser, this is one bike you have to ride to believe."

I have no problem with the use of superlative words to describe the power of the Boss Hoss. When you have a bike so powerful, of course you can get away with comments like "pavement pounding torque". But then again with a bike over 1200 lb., are you really justified in saying "handles with ease", "a lot easier to balance than you might think" and "relatively easy to maneuver."? I guess the key is "relatively" and "than you might think". I never have a problem with weight while actually driving at any speed. The problems begin as you come to a stop. They continue as you try to park the bike in your shed or garage, or even in the open air. More problems occur at motels, restaurants, gas pumps, camp sites, coffee shops, beaches, ferries, U-turns, and on slippery or uneven surfaces. So if Boss Hoss is "relatively" easy to balance once rolling, then my moped makes "more power than you would think" while on its centre stand.
Copyright the Lost Motorcyclist