Fear of Lack of Height 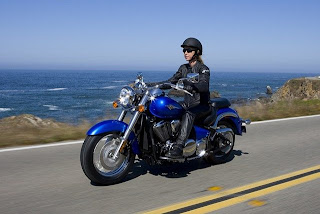 Does my Kawasaki give me Vulcanophobia? I think so, but not because I may get into an accident, or because it may break down, but because when I look at the Vulcan, I'm afraid of how much my ideas of motorcycling are changing.

In December, I went to the Motorcycle show and sat on the BMW K1600GT six cylinder sport touring bike. Because this bike is a perfect blend of my two most recent long distance motorcycles, I should have caught a severe case of bike fever. But I didn't feel much of anything. Right now, I should be busy figuring out how I can liquidate my retirement savings plan. But no. Instead I'm wondering about how to attach a pillow to my Vulcan.

I always liked the Vulcan's fairly traditional lines, but not too long ago I would have scorned it for its low-seat and foot-forward riding position. Now I can hardly imagine going back to a sport touring bike. Even for an earth shattering knock-em-dead bike that blows everyone and everything away. I'm afraid that in my old age I have decided to settle for a bike that is not all that it could be.

I may indeed be ready to settle, judging from where my trips took me last year. Instead of one trip to the Baja Peninsula of Mexico, I made about 30 trips to Port Dover Ontario. How scary is that? The answer is yes, it is very scary, to me anyway. I used to do trips to Port Dover just to test out the equipment, to make sure the bike would hold together before heading out on a real trip. Now I go round the block to make sure I'm ready for a trip to Port Dover. Sometimes I am really tired even after a trip to Port Dover. It's only like 200 km there and back. And I sit around Tim Horton's or the Apple Fritter place for at least an hour at Port Dover, consuming donuts and other unhealthy things.

When I had a Honda CBX, or my BMW K1100LT, my main goal was to get out on the road. For sure to get out of Ontario, and hopefully as far as I could go until I hit some major obstacle like an ocean. Although I used to stop sometimes to eat, I rushed my food so I could get back on the bike.

With the Vulcan 900, in the three years I have owned this bike, I never made it to the Pacific. I never even made it further west than my Mother's house on the 401. At Port Dover, I pretend Lake Erie is the Pacific ocean.

To me one of the most significant changes between my previous bikes and this Vulcan is the 5" lower seat height.

This is the lowest seat of any motorcycle I have owned. Five inches is an awfully long way to drop the seat.

Usually the main reason to have a low seat height is to be able to actually touch the ground with your feet when stopped. Now I can almost touch the ground with my knees. One disadvantage was not being able to see as easily over other cars. However with the number of SUV's on the road now, even the higher seat does not help too much.

Another disadvantage of a low seat is that your feet must be raised more for riding. I find that uncomfortable. Cruisers solve this problem by placing your feet further forward to avoid cramping the knees. They also lower the footrest for a little extra space. But low footrests inhibit high speed cornering at steep leaning angles. Funny how one seemingly little thing like a lower seat seem to have endless repercussions.

Also, the lower sitting position with the feet out front works well with an aftermarket rider backrest for longer distances if back ache is a problem.

I am starting to get used to the lower seat height. It makes me look fat however, because with my legs higher, I push up the bottom of my coat into a bulge that looks like a beer gut. Oh, wait no that is actually a beer gut.


Picture of a woman riding a Vulcan 900 classic, probably on the Pacific Ocean. Definitely not me.
Copyright the Lost Motorcyclist